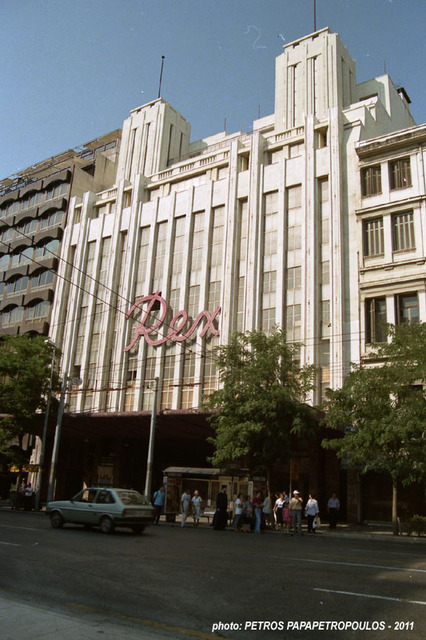 The Rex Cinema was built between 1935 and 1937, opening in 1937. It is a large cinema, and was located next to the (now demolished) Art Deco style Titania Cinema. The interior was decorated by Greek painters Yiannis Tsarouchis and his assistant Yiannis Palaiologas, who specialised in modern Greek figurative painting.

In 2009, the Rex Cinema is a live theatre specialising in Greek floorshow/caberet style entertainment with singers and dancers in traditional costumes.

The monumental facade of the Rex Cinema, photographed in June 2008:
View link

I remember our tour bus driving by this theatre when I was in Athens in 1982. It was playing a movie about some kind of monster shark—clearly inspired by “Jaws.” I was unable to photograph the theatre, since our bus was passing so closely to it.

Rex building consists of 3 theaters: Rex (ex movie theater) on ground floor, Rex-Kotopouli theater (upper floors) and Cineac (ex movie theater) underground. Rex was one of the most successful movie theaters in Athens and Cineac (Cine Actualités) also, specializing in small duration movies plus cartoons, short comedies and news. Rex operated during 1937 – 1987 and then it was transformed to a music hall. Cineac kept its variety program during 1969 – 1975, then it was renamed as Rex 2 presenting first run movies. It is transformed to a theater now.