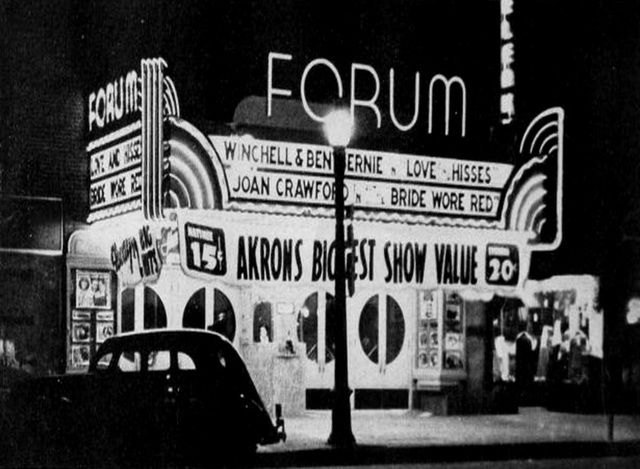 This is an empty lot today.

Skirball Brothers built Akron’s Forum Theatre in 1938, according to an item in the April 9 issue of The Film Daily that year. The architect for the project was John Eberson.

The Forum came in as a low-cost grind house of second-run features. It would evolve or devolve into one of Ohio’s greatest grind houses. By the 1960s, the low-cost theatre posted no start times and often had imaginative thematic triple features. However, it was drawing sketchy crowds and a well-covered altercation in late 1967 didn’t help the theater’s reputation.

The Forum’s last showing was January 28, 1968 with a triple feature of “Deadly Bees,” “Vulture,” and “St. Valentine’s Day Massacre.” At the end of its 30-year lease, it celebrated the end of its triple feature with the dreaded “all fixtures, seats and equipment” sale just hours after the last showing. Few theaters in the history of non-porn houses could top of the sheer volume of prints that were shown in a thirty year period than the Forum.

Three different owners had three different concepts for restoring the Forum arose in 1971, 1973 and 1985. The most ambitious of those was the latter which, ironically, led to an extensive analysis of the theater’s condition and why the long boarded-up theatre would get razed late that year becoming a vacant lot.

This opened on January 13th, 1938. I uploaded its grand opening ad in the photo section.