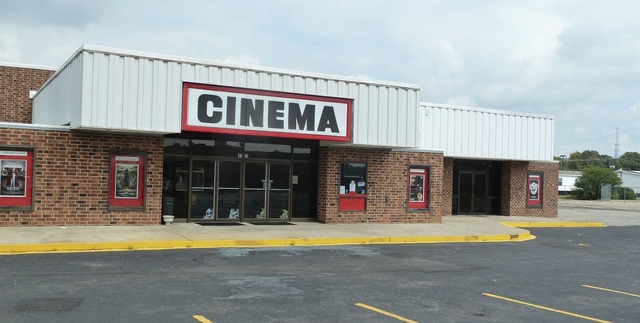 Also known as the Roanoke Cinema 1 & 2, the cinema opened in the late-1970’s as a twin cinema under the Stewart & Everett Theatre chain. Carmike Cinemas acquired it in 1986 and later this moviehouse became a independent chain. As of the writing,it is the only movie theatre operating in the town.

How many theaters were there in Roanoke Rapids during the 1970s? I ask because I wonder if perhaps this theater, described above as a twin, opened as a single screener? My notes from a recent research project indicate that, circa 1977, there was a “Cinema” operating in Roanoke Rapids, and looking at the photo of the theater (on the theater’s website, viewable from the link provided above under Related Websites) one can see the marquee reads “Cinema” and the design of the building looks like a second screen was added.

There were two theatres in Roanoke Rapids during the mid-to-late 1970’s. One was the Peoples Theatre that was located in Downtown Roanoke Rapids. The other was the Cinema,located on East 10th Street.

The roadside marquee identifies this theater as the “Roanoke Cinemas”. This theater was probably built in 1971, as it strongly resembles the Neuse Boulevard Cinema in New Bern. The Roanoke (Rapids) Cinema was originally a single screen theater (as was the Neuse Blvd. Cinema); I remember passing it by going to visit my great-grandmother in the early 1970s and there was only one movie listed on the marquee in those days. If Martin Theatres did own this theater, it was their only North Carolina location east of Raleigh.

Coate and NightHawk1 were probably right about this house opening as a single screener, probably in 1971. The May 31, 1971 issue of Boxoffice had a brief article headed “Schneider-Merl’s 9th Theatre is Announced” and it was about a project for a 600-seat single screen house at the Plaza shopping center in Roanoke Rapids. It was one of at least four projects the rapidly expanding Schneider-Merl chain had underway at the time, three of which (that I’ve found so far) rated articles in Boxoffice that year. The other two were at Durham and at Boone, North Carolina. All three articles cited Tom Hutchins of Spartanburg as the architect of the theaters.