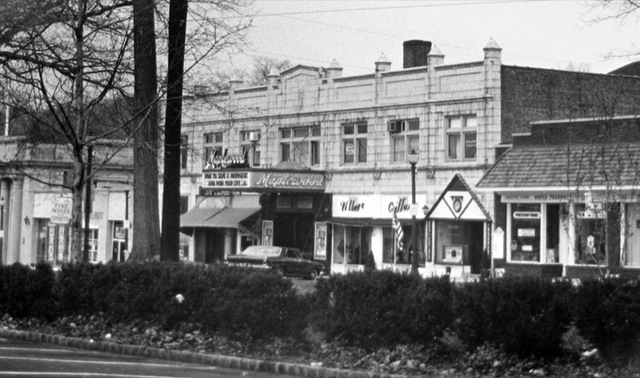 Opened on March 15, 1927 with Rudolph Valentino on “Four Horsemen of the Apocalypse”, the Maplewood Theatre began showing movies in addition to live performances in the 1940’s.

The theatre was enormous and was one of the largest in New Jersey. It was cut into three and later four screens in the late-1980’s and early-1990’s.

“It is my general recollection however that the extravagant interior is still under modern covering… and a small part of the ceiling (with egg and dart moulding) can be seen peeking out of the dropped ceiling in one of the rooms. It is a candidate for restoration for sure, and it is in a very progressive town that gets behind these sort of things. The theatre is still a huge success as a 4-plex and there is little chance of it going out of business”.

It was closed on March 16, 2020 due to the Covid-19 pandemic. It was announced on December 7, 2020 that the closure would be permanent. It was taken over by Cine-Lab and following renovations a reopening is planned for 2022.

@Poland – – this is one of the rare downtown ones Clearview didn’t buy. Clearivew as an operation has gotten better, and spends resources upgrading the concession areas, bathrooms, and seats – – but never on correcting major mistakes made in the projection room when subdividing theaters. So many of the theaters they buy were poorly built/subdivided that you’d have a better experience in a discount house.

Remember or hear family tales about the Maplewood Theater’s glory days? The Durand Hedden House and Garden Association wants to hear from you! In preparation for a forthcoming exhibit, Durand Hedden is collecting pictures, ephemera, and anecdotes about the Maplewood Theater’s 86 year run. Did you happen snap a Polaroid when Ghostbusters was playing? Found something on eBay you want to share with the world? Even as much as an old ticket stub, we want it! Stories and memories are also welcome. Contact or 973-763-7712 to help make this exhibit a success.

How did the exhibit go?

The exhibit was… astounding. The original blueprints were found and used to build a three dimensional model of the auditorium. A Wurlitzer Style E Console (same as it originally had) was on display, with actual recordings of the organ from 1927 made by Edison Records and never released! The National Park Service had found them. The exhibit covered every decade, even the dark and dank 70’s and 80’s era… with a few highlights like when they managed to get Jaws and sell the place out every night. The theater manager in the 80’s saved the posters, including the Ghostbusters poster that hung out front for months. (Not a poster, THE poster from THIS theater). The best had to be the 1940’s when the theater brought back the lives shows and ran through a different show every week with A-names in the cast like Helen Hayes, Ethel Barrymore, Tallulah Bankhead, Ingrid Bergman, Paul Robeson, Teresa Wright (who lived in Maplewood!) among endless more. The climax was the first revival of the thus-far-failed Porgy and Bess where Cheryl Crawford cut down the opera into a musical which was moved to Broadway after leaving Maplewood. Amazingly, there were photographs of these productions from the Billy Rose Library… as well as huge clippings binders reviewing every show. The exhibit was simply everything this theater deserved and more.

I believe I saw “Sherlock Holmes Smarter Brother” here when my aunt took me. I would have been about eleven years old. RIP Gene Wilder. This was when the place still had only one screen. It really was enormous.

This theater was one of the few to get Dolby 3D instead of Real 3D at the time. I know because I remember seeing a film here and it having completely different glasses along with having to return them at the end to staff instead of just throwing them in a bin.

Is the Dolby 3D really different than Real 3D? I think the quality is a lot better imo

The operators of movie theaters in South Orange and Maplewood have both ended their leases, town officials have confirmed.

Meanwhile, the Maplewood Theater operator removed its property from the building on Maplewood Avenue last week.

“The COVID pandemic has impacted every aspect of our community including our small businesses and broader business districts,” said Maplewood Mayor Frank McGehee when reached for comment. “We continue to work with our county, state and federal representatives to provide information and advocate for additional resources.”

Maplewood Theater (credit cinematreasures.org) “In the interim, we encourage residents to shop local and not only during this critical holiday season but in the months to come,” added McGehee. “Our small businesses are what make Maplewood such a vibrant place to live and we all need to do our part to support them now more than ever. This includes buying gift cards, shopping online and promoting them heavily. We will get through this and it’s our community that will make the difference.”

In South Orange, Schnall noted that when Bow Tie opened again during the summer, “attendance remained too low based on state guidelines, and the corresponding drop in concessions dropped revenues way too much.”

Schnall reports that “the SOPAC board has created several internal work groups to consider alternative uses for the spaces and even whether operating a movie franchise would be viable. Meanwhile, SOPAC staff is actively engaging individuals and businesses to rent some of the very special space (including the stage and performance hall) for usage and thus rental income.”

SOPAC At Night The news isn’t specific to South Orange and Maplewood, as theater chains struggle nationally and globally with COVID-19 shutting down or restricting theater audiences, major film debuts being delayed, and at least one major studio — Warner – announcing that all of its 2021 films will debut online.

Overally, businesses are struggling in the two towns. Maplewood Kings was shuttered this past weekend after its parent company, which is in bankruptcy, failed to find a buyer. South Orange Village Center announced recently that 13 businesses in the town center have closed in 2020 (although three more have opened, with another scheduled to debut before the end of the year). The towns’ special improvement districts have responded with special COVID-19 marketing and socially distanced/remote events as well as open air markets, gift cards and other incentives to shop local.

Maplewood historian and President of the Duran-Hedden House & Garden Association Susan Newberry notes that the Maplewood Theater building, which is now 93 years old, has been through hard times before — and was even closed for two years from 1988 to 1990. In January 2015, Newberry helped research and write a fascinating history of the building and its illustrious history with live theater as well as film:

this article says that the Maplewood will reopen in 2022 under same group as has just reopened the South Orange theatre.