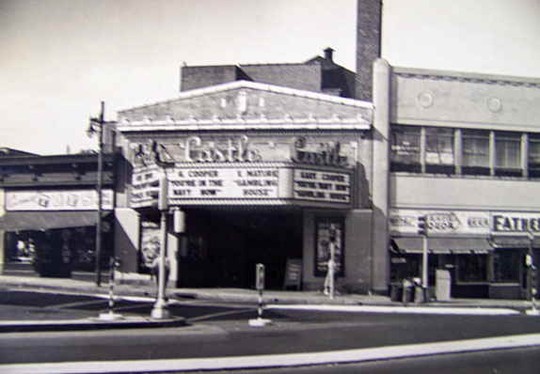 “Don’t know much other than it has long shown films which would interest an African-American audience. I haven’t been inside. It has or had a Wurlitzer that was shipped on 12/19/1922 and I would presume that is about when the theater was built. By 1941 the Castle Theatre was operated by Warner Bros. Circuit Management Corp. I haven’t seen it in years, but I know it was still open until recent times.”

I went to the Castle in the 1960s. It was our “other” choice if nothing good was playing at the Sanford. The only pic I recall is
To Sir with Love. And I seem to remember a very long time ago, seeing
The Hound Of The Baskervilles—the old Hammer Films version with Peter Cushing and Christopher Lee.
As an aside, I remember that my mother had a friend who lived near
Francis Chevrolet. This lady was divorced and had a young son (about my age). I remember asking my mother about the husband and was told that he was an artist and that his works were displayed in the Castle Theater lobby and they could be puchased.

I grew up in Irvington and graduated IHS in 1977. My movie theater of choice was always the Sanford Theater. However, I do remember one specific visit to the Castle Theater to see the movie Tommy. There had to be about 600 kids in there, all of us on hallocinogens of one kind or another, tripping in the Castle Theater watching Tommy. I also believe they had a balcony which I was sitting in during this movie! LOL!! I believe at a later time, they were the only theater in Irvington that started doing the Rocky Horror Picture Show as I had some friends that used to go.

My uncle is Ralph Elsman. J.T. Castles, is his grandmother Laura’s brother and his great-uncle. My uncle has a plaque from the Castles Ice Cream Company, also located in Irvington. James S., please let me know if you are still interested in locating the Elsman family.

I’d love to see some photos of this theater. Does anyone know of any online, or can post any they have?

I saw Frankenstein there for the first time with my sister in the summer of 1956. We lived on Union Avenue. I was there in 2000 visiting and the marquee had been torn down, but the theatre was still operating apparently. I also went to the Sanford frequently. Saturday matinees were great back in the 50s.

As an aside…anyone here attend Irvington High in the late 50s?

I graduated IHS in 1958, and was at the Castle Theater for many Saturday matinees. Unlike some of the other readers, I did not prefer the Sanford – it was a longer walk to get there. I remember seeing “Frankenstein” with my cousin. Afterwards, we drew stitches on our foreheads. I remember choking on popcorn while Esther Williams swam among the coral. In the 1960’s I saw “The Graduate” with my mother, and was so embarrassed by the sexually explicit content! It’s too bad that the marquee has been removed. All the best to my friends in Irvington! DHJ in Orlando, Florida

The front looks new – and enlarged. it is now a beauty salon. It’s hard to tell about the auditorium – either this is a new building that replaced a long narrow lobby leading back to a large wide non-balconied auditorium or it was a fairly compact auditorium close to the street. I suspect it may have been the former. The old photos show a quite narrow entrance.

I still live in Irvington. It’s far from the place that you guys have posted. (Can’t wait to move) anyways, I’ve been to “The Castle” maybe 3 or 4 times. I grew up in the late 80’s and 90’s. I believe they closed “The Castle” around 1995 into 1996. It was around the time the Lowes Theatre opened on Springfield Ave in Newark and had multiple screens. I remember me and my brother bugging our dad to take us to see “Teenage Mutant Ninja Turtles III” in the Spring of 1993. For me it was only a 10 minute wall to the center. The last movie I saw their was maybe a Muppet movie, but the place was fulling apart by then. I remember my dad saying the floor was so damn sticky. (lol)

Today, you wouldn’t even think it was a theatre except for the once marquee, that now says Avon. The whole Irvington Center is in need of help. I think I grew up in the last few years good years of Irvington. By 1998 things really went down.