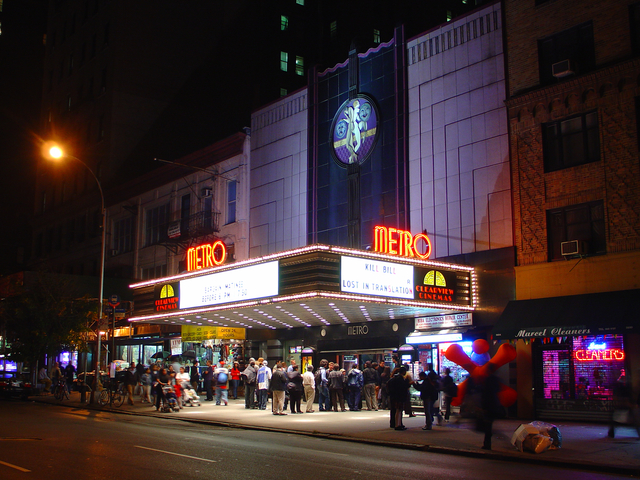 Beginning as a first run single screen theater, the Midtown Theater, was taken over by New York Cinemas and was twinned and renamed the Metro Twin from August 29, 1986. The former balcony became the second auditorium, but elaborate ornamentation remained on view in both spaces. It switched to second run and then adult films during New York City’s darker years (the 1970’s and 1980’s).

This underrated theater closed in January 2003, shortly after the nearby Olympia Theatre met the reaper, but reopened only a couple months later.

The Metro Twin was once more closed by Clearview in August 2004 but again reopened under independent ownership in December 2004 after a renovation. The New Metro Twin closed once again on December 1, 2005. The beautiful and unique Art Deco style façade is legally protected, but the interior was gutted and offered for retail.

In April 2012, it was announced the New Metro Twin would be reopened by the Alamo Drafthouse chain in 2013 as a 5-screen theatre on 3 levels. In September 2013, these plans were scrapped and in May 2019 it was vacant, advertised as ‘Space Available’.

Alamo Drafthouse won’t be opening at the Metro, after all: http://artsbeat.blogs.nytimes.com/2013/10/01/alamo-drafthouse-scraps-plan-for-upper-west-side-movie-theater/

Damn… That is too bad. Seemed like an ideal salvage for this old structure. Now, I’m sure, whatever is left of the place is destined to be hauled away as rubble.

not sure if this listing is current re what sounds like vendor booths http://www.besenretail.com/2626-broadway.htm

It’s a shame that Alamo Drafthouse could not make it work as a movie theatre. Well at least the exterior has landmark status, so that can’t change it, thankfully.

Hello- after Alamo scraped their plans is the' theater just sitting there boarded up?

Please correct your desciption, New York Cinemas (owners of Cinema Studio and Lincoln Plaza Cinemas) ran the Metro Theatre. They made that theatre a twin with only one auditorium Dolby Stereo.. Clearview took the theatre over from Cineplex Odeon after they were force to sell some theatres off when they merge with Loews.. I enclose a ad with NYC owning the theatre

There is something incorrect about this description. I remember very specifically because I was there. Sometime in the middle 80s, the theatre had a grand opening as the Metro and they completely restored the inside to art deco style and even had users who had carts with popcorn and snacks going up and down the aisles. The first movie showed was King Kong. It wasn’t a duplex at that point! The only reason I went was to see the unedited Kong on a big screen! The theatre is still there and available for rent.

It became a twin in 1982. The Jessica Lange “KING KONG” was a 1976 release. The food carts down the aisle were a Cineplex Odeon project that started in the early nineties. Are you talking about the original “KING KONG” as a revival?