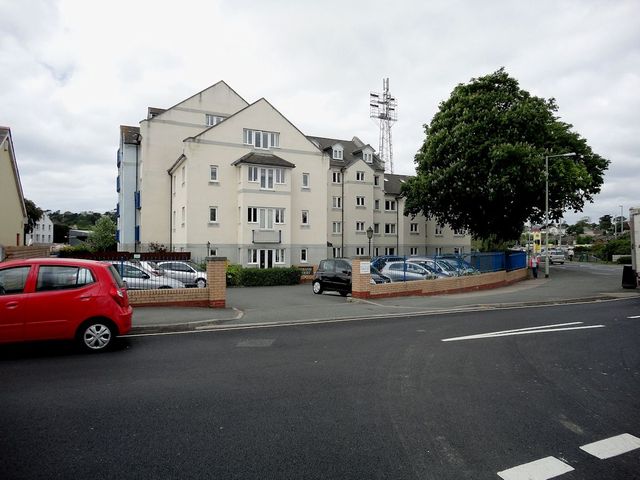 The Strand Cinema was opened on 21st July 1938. The cinema had a modern brick facade, and was set in formal gardens with trees surrounding it. The auditorium had a 40 feet wide proscenium

I did some Summer relief work this cinema in the early-1960’s. In those days you could travel from Swansea to Bideford by train. Whilst I was there it was a very busy cinema catering mainly for Summer holiday visitors. Staff told me that the Winter business was always very poor but this was made up by the strong Summer trade.

The projectors were the dreaded BTH machines which most projectionists hated. I did not enjoy the experience and was happy to leave at the end of my agreed time. The management offered me a permanent post as a second but there was no way I would have taken it if it meant living with those machines.

The Strand Cinema was independently operated throughout its life, and was closed on 2nd May 1981, and became a discotheque named Halley’s. It was demolished in January 1992, and housing built on the site.

A vintage photograph of the Strand Cinema in 1980:
View link

I worked on BTH projectors from 1958 until 1990, when we had to have them replaced after the mechanism on one of them broke beyond repair, ,and had to be replaced by a Westar projector and tower.

I loved our old (Type A) BTH machines which were installed ten years before I started as a young apprentice,they never gave any trouble and films rarely broke even though copies in those days were often in poor condition.

My particular cinema was The Town Hall Cinema in Pwllheli,now renamed Neuadd Dwyfor (Dwyfor Hall)It’s still open and is run by the district council.

I should also mention that BTH had excellent service engineers, one in particular was an absolute genius I thought.

Forgot to mention that one of our old BTH projectors along with it’s sound head and arc lamp is on display in the foyer of Neuadd dwyfor. I erected it myself before my retirement, I also found this machine very easy to lace up compared to many other type of projectors.

Hmmm The Company I worked for as one of its General Managers, bought The Strand Bideford We had around at one time 50 or so Cinemas on BTH Supers and had very little problem with most of them. Provided they where kept free of Carbon Dust and oiled Daily.. they where never any problem. In 1974 if my memory is correct we installed one of the 6 sets of Brand new Westrex 7000s equipments in Bideford.. Which ended up being replaced in most of our the Theatres very quickly.

The machines at the Strand were the integrated Supers.Ok as projectors but a nightmare when one had to do quick changes from flat to scope during Pearl, Dean and Youngers/Trailer times.

Cannot remember if the BTH set had been converted to Xenon before the Westrex was put in ?

James_colwill I started as a junior projectionist in 1960, I still remember the 2 films showing, Commanche Station & Tomango. Chief was Ted Parr, 2nd projectionist was Ian Karslake, The Manager was Mr Battrick. Mornings consisted of cleaning the stationary Ruston & Hornsby diesel engine. Started on compressed air, one ran in the evening, both drove 3 phase Crompton Parkinson 32kW 240v generators, at the end of the evening performance on slowing the engines pumped compressed air back into the air bottle at 180 psi, ready to start the engine the next day. 110v emergency lighting was supplied by a bank of 48 large 2v accumulators wired in series, trickle charged via 2 mercury vapour rectifiers located in the rectifier room next to the projection room. There were 3 other BD12 MV rectifiers that supplied 50v DC at high current for the arc lamps. The Cinema was built for sound, it had a massive 18 inch loudspeaker & a horn tweeter located behind the screen. The amplifier was virtually bomb proof, with large transformers, the output tubes were 4 x Pen 44’s in parallel push pull, with 280v on their plates, output was around 30 watts. The 2 projectors were the extremely reliable BTH Supa mark 2. Everything was kept in immaculate working order & everyone knew their area of responsability. Around 8pm Mr Battrick visited the projection room & had a cup of tea, he was affectionately known as the old man. I worked my way up to Co Chief, but left after 6 years. I have very happy memories of the place. If anyone would like any more info, I would be happy to help.