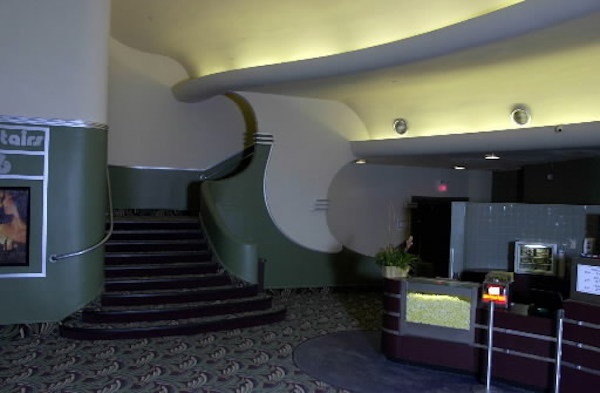 Located in historic Shaker Square on the SW quadrant, the Colony Theatre was opened by Warner Bros. Circuit Management Corp. on December 28, 1937 with 1,523 seats. Designed in an Art Modern style by noted theatre architect John Eberson.

Now known as the Shaker Square Cinemas, it has been renovated and operates with a mix of first-run Hollywood fare, foreign and independent films by Cleveland Cinemas. It was taken over by Atlas Cinemas in February 2019.

Geez,Chuck.I don’t know if even IMPRESSIVE is the right word.what a Theatre!

I worked this theater as part time Assistant Manager of The Colony in 1950. It was a beautiful place to work. Most of my time was spent at the Uptown Theater on St. Clair Ave. in Cleveland. hehrman28

Three photos of the Shaker Square Cinemas can be seen here, on the web site of Mesbur+Smith Architects, the Toronto firm responsible for the 1999 renovations.

The auditorium had been carved into five screens in 1983, and the original lobby had been destroyed by a fire at some point. When Cleveland Cinemas took control of the house in 1999, the earlier multiplexing was torn out and replaced with a new six-screen configuration with stadium seating, and John Eberson’s original Art Moderne lobby design was restored.

Joe, I don’t think that the Colony was split into 5 theaters until 1992. I have a memory of seeing the restored 1989 version in the full Colony auditorium in 70mm complete with the full score. (overture, intermission, and exit music) Needless to say…it was a spectacular cinema experience.

Oops.. of Lawrence of Arabia that is…

radarKW is correct. The Encyclopedia of Cleveland History provides this page about the Colony Theatre, and gives January, 1992, as the time of its reopening as a 5-screen house. I’m not sure what my source was for the claim of 1983 for the multiplexing, but it might have been the Mesbur+Smith page which is now gone. Or it could have been a typo. Spell check, alas, never finds mistakes in numbers.

My grandmother said she and my grandfather went there when they were dating, which would have been in the late 30s. She said they’d sit in the balcony. I asked her (teasingly) what she was doing in the balcony, and she said “smooching!”

The theater closed January 30, 2019, but is expected to reopen February 14, 2019 under the operation of Atlas Cinemas:

Here’s a new 4-page 50th anniversary FIDDLER ON THE ROOF retrospective featuring a roadshow playdate chronology and historian Q&A. The Colony’s year-long run is mentioned in the piece.