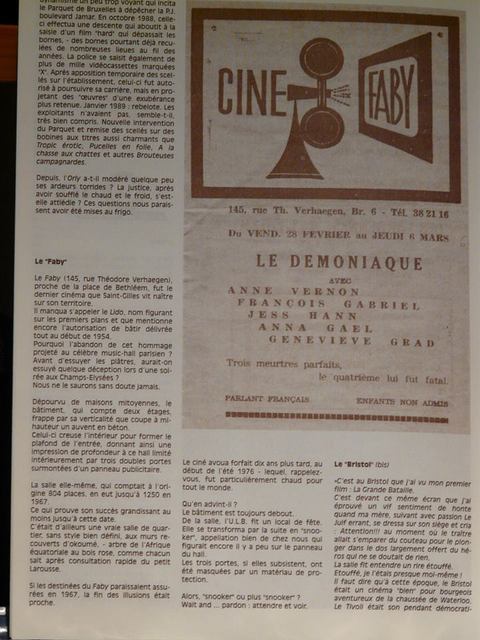 This was the newest cinema of Saint-Gilles district. It opened in early-1955 the auditorium runs parallel to the road at the rear of buildings, but can be partially seen at the rear of the entrance. During the 1950’s and early-1960’s this cinema was more an adult cinema where children were not allowed, and screened mostly French movies like Marcel Carne’s “Terrain Vague” in 1961 and “a Bout de Souffle” (Breathless) and “Shoot the Piano Player”. Also horror movies and spy films James Bond ‘look-a-like’ spinoffs staring Eddie Constatine, a few titles “Secret Agent 003”, “077 Mission Lisbonne”, both Italian films.

In the mid and late-1960’s, it began to show all family films like “Battle of the Bug”, due to the closing of Elysee Cinema and Bristol Cinema. Rumours said however that some days at midnight it showed X-Rated movies with less publicity. It finally closed in 1976 is now a retail Brico store selling hardware and construction equipment and materials.

A recent photograph of the former Faby Cinema:
View link