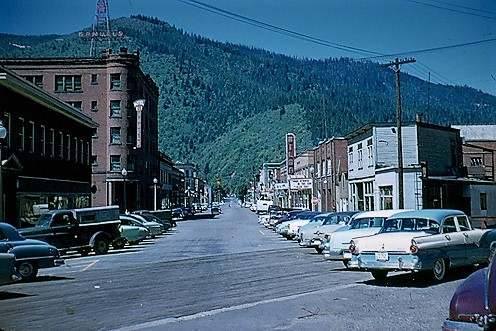 Opened March 25, 1947, the Wilma Theatre in Wallace, Idaho was where I grew up. I remember it as being a nice theater with plush seats and a curtain over the screen that actually opened and closed. There was a nice seating/lounge area next to the lobby. It closed March 12, 1973.

After it closed, the roof caved in under the weight of snow one winter and it was subsequently demolished. There were also Wilma Theatre’s in Kellogg and Coeur d' Alene, Idaho and Missoula, Montana.

amendment: The theater in Kellogg was named The Rena. It was owned by the same company that had the Wilma in Coeur d' Alene, Wallace and Missoula.

The Wilma Theatre at Wallace opened on March 25, 1947, and was scheduled to show its last movie on March 12, 1973, according to an item in the March 26, 1973, issue of Boxoffice Magazine. The theater was being taken over by the Idaho Highway Department, and was to be demolished to make way for an extension of Interstate 90. Manager Gil Sessler said that the building “didn’t have a crack in it.”

Local opposition to the routing of the highway later forced a relocation of the project, and it was not completed until 1991, but the Wilma Theatre building apparently didn’t fare well under highway department ownership.

The Wilma was also the subject of an article in the June 7, 1947, issue of Boxoffice Magazine. The house was built by Edna Wilma Simons, widow of Billy Simons, founder of the W.A. Simons Theatre Circuit. The Wilma was designed in the Art Moderne style by the Spokane architectural firm Whitehouse & Price, and was decorated and outfitted by the Seattle branch of B.F. Shearer & Co., theatrical suppliers.

At the time the Wilma opened, the Simons circuit operated twenty theaters in a dozen towns in Montana and Idaho. The Wilma featured a stadium seating section, and a stage for live performance. Mrs. Simons, a former actress, believed that live theater would make a comeback.

Billy Simons had arrived in Wallace in 1909, built the Wallace Hotel, and began exhibiting movies shortly thereafter, first in a theater in a converted storeroom and later in the Masonic Hall. He soon operated theaters in a number of towns in the region. In 1920 he moved his headquarters to Missoula, Montana, and was head of the Northwest Theatres Company and the Yellowstone Amusement Company. He died in 1937.

The architects, Whitehouse & Price, were best known for thier numerous churches and public and academic buildings, but did also design the Cordova Theatre at Pullman, Washington, and, as associates of lead architect Robert C. Reamer, the Fox Theatre in Spokane. In 1946 they designed a theatre to be erected at Lewiston, Idaho, for the Lewis-Clark Amusement Company, but it was apparently never built.