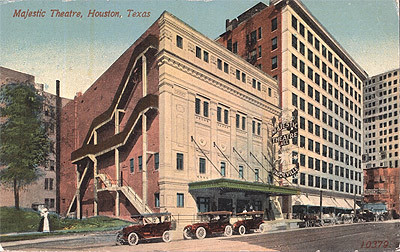 This is an earlier second Majestic Theatre in the city, which opened on February 21, 1910 as a vaudeville theatre, with movies as part of the program. It was built by Karl St. John Hoblitzelle for his Interstate Theatres Inc. circuit. It had two balconies, the upper one reserved for African-Americans only. Original plans were drawn in 1908 by architect John Eberson of Hamilton, OH, but these were superseded by plans by architectural firm Mauran, Russell & Garden, with interior decorations by O.W. Mitchell of the interior decorating firm Mitchell-Harbach of Chicago, IL. It was renamed the Palace Theatre on January 29, 1923 when the John Eberson designed Atmospheric style Majestic Theatre opened on that day.

It was later operated by Paramount Pictures Inc. through their subsidiary Will Horwitz, but was listed as closed in 1943. It was re-opened under new management on January 25, 1945, as the Neuvo Palacio Theatre, and finally closed on April 3, 1946. It was converted into newspaper offices for the Houston Chronicle. There are some excellent photos of the theatre in the book "Cinema Houston".

Is there a source attributing the original, 1910 design of this theater to John Eberson, or did he just design a later remodeling? (The project index from the Wolfsonian Collection should say, but I can’t check it now as the computer I’m stuck with won’t open .xsl spreadsheets.)

I found this index entry citing an item in a 1912 issue of The Western Architect which attributes the design of a Majestic Theatre in Houston to the St. Louis firm of Mauran & Russell. I would presume it referred to this house built in 1910. Mauran & Russell designed a number of buildings in Texas during this period, judging from the results of a Google search on their name, so it seems plausible that they designed the second Majestic.

I still can’t find confirmation that John Eberson designed or remodeled this theater. Eberson designed the third Majestic, opened January 29, 1923. The day Eberson’s Majestic opened, this theater was renamed the Palace, according to the book “Cinema Houston” by David Welling and Jack Valenti.

As the Palace it housed a stock company, and served various other uses, including stints as a church and as a theater for radio broadcasts, until it was remodeled in 1937 and reopened as the Zoe Theatre. The Zoe ran westerns for about a year, then foreign films, and even attempted a revival of vaudeville. After being closed for some time, the house reopened in 1945 as a Spanish language movie theater called the Neuvo Palacio, but soon closed its doors for the last time, on April 3, 1946. The theater was demolished to make way for an expansion of the Houston Chronicle building.

This theatre has another St. Louis connection: It was once managed by famous cyclist William Sachtleben. Sachtleben was from Alton, IL and gained notoriety when he and Thomas Allen, from nearby St. Louis, MO, traveled around the world on bicycles in 1892. They wrote a book about their travels and Sachtelben later returned to Turkey to locate Frank Lenz, another cyclist who went missing in a separate attempt to cycle around the world. This was the subject of a 2010 book entitled The Lost Cyclist.

A biography of architect John Lawrence Mauran indicates that this theater was designed toward the end of the period when he was a partner in Mauran, Russell & Garden (with Ernest John Russell and Edward G. Garden,) and before the successor firm of Mauran, Russell & Crowell was formed (note correct spelling of William DeForrest Crowell’s surname.) Garden left the firm in 1909, the year this theater would have been designed, and Crowell became a partner in 1911, the year after the theater opened.

This theater isn’t totally demolished; at least not yet. It was on the same block as the Houston Chronicle, and was absorbed by the Chronicle after the theater closed in the ‘40s. Before that, around 1915 or so, financier Jesse Jones actually bought the “air rights” above it to build the inverted L-shaped Milam Building to accommodate the new larger Houston Club. In the '60s, all of these connected buildings were covered with a white-marble and dark-glass facade to give the illusion that they were all one building. The complex remained like that until the Chronicle moved its operations to the old Houston Post building on the SW Freeway in spring of 2016. The downtown complex of buildings were sold and will be demolished later this year. THEN, we can say that the Majestic/Palace has finally been torn down. http://www.houstonchronicle.com/local/bayou-city-history/article/Throwback-Thursday-to-Houston-s-past-6555118.php#photo-9383328 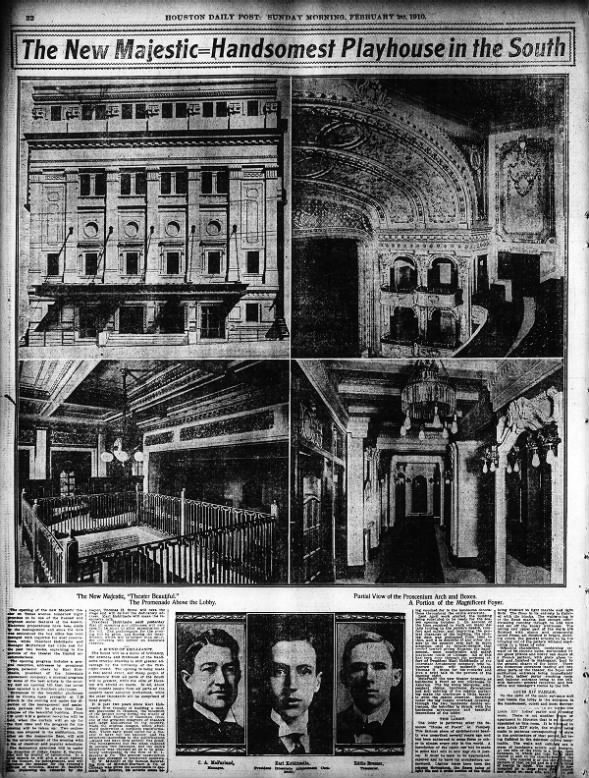 Reopened as Nuevo Palace with “Nana” on January 25th, 1945. Another ad posted.

The 1910 Majestic WAS designed by Eberson. https://www.google.com/books/edition/Industrial_Development_and_Manufacturers/Vmg9AQAAMAAJ?hl=en&gbpv=1&bsq=eberson

Eberson worked with associate architects and often wasn’t named in early projects; this article shows that he worked with Mauran, Russell & Garden on this design. The design is typical of Eberson’s work in this period, as well.