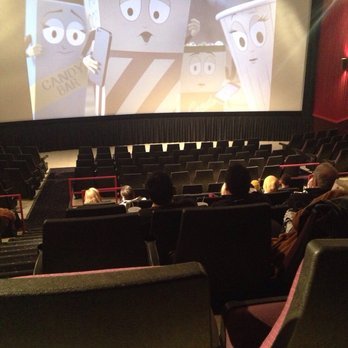 The Star 18 and IMAX theatre shows first run attractions and features all stadium seating and stereo sound in each auditorium. Originally operated by Star Cinemas, then became a Kerasotes Theatre. Later operated by AMC it was taken over by NewVision Theatres in 2017.

With Marcus opening the Palace in Sun Prairie and upgrading the nearby Point, this multiplex seems to be struggling. Was here for a matinee last week and was the only person in the auditorium. They are holding onto movies longer and also showing a mix of indie and Bollywood films. Never a good sign.

The Star is currently installing power reclining seats to 5 of its auditoriums. Once this is completed, the remaining screening rooms will receive the upgrade, with the exception of the IMAX. A liquor license is also being sought to bring about the cinepub experience.

An interesting story here. The AMC Fitchburg 18-screen theatre has been sold to a small New Jersey-based theater chain called New Vision Theatres. The theatre has been rebranded Fitchburg 18. The sale was prompted by AMC’s purchase of Sundance Cinemas. Under the U.S. Department of Justice’s terms for approving the sale of the Carmike Cinemas chain (which included five Sundance theaters) to AMC, the DOJ required that AMC sell off one of the two theatres in markets where it already had a theater, including Madison. Many assumed that meant AMC would sell the six-screen Sundance Cinemas since the chain, largest in the world, is not known for managing smaller arthouses like Sundance. But instead, AMC opted to sell its Fitchburg theatre to New Vision, which appears to be a new company that now owns 10 theaters in six states. “We are excited to welcome you and help you get to the movies and more of what you love!” the website announces. AMC recently completed a major remodel of this theatre, including adding reclining seats and a bar in the lobby along with AMC’s distinctive bright-red soda machines. New Visions’s website said that its theatres will offer live sporting events and interactive video games and on its website, New Vision said it will not honor the AMC Stubs loyalty program in which customers earn points towards discounts on movie tickets and concessions. Instead, the theater will offer its own New Neighbor discount card. All AMC passes and coupons will be honored at the theater through the end of July. Also, New Vision sells a “Refillable Popcorn Bucket” for $21 that entitles the owner to $4.25 refills for an entire year.

Status should be closed. New Vision Theatres is closing this location and all its others. Story here: https://www.channel3000.com/new-vision-theaters-fitchburg-imax-to-close/

In 2017, the theatre was part of the force sale of AMC locations following its merger with Carmike. New Visions Circuit took on the location. It closed the location on March 17, 2020 due to the COVID-19 pandemic along with theatres all over the world.

Though hoping to reopen and connecting with its audience through social media into July of 2020, the theatre was closed permanently on July 13, 2020 when New Visions Circuit went out of business. All of its other locations were closed permanently, as well.

As of April 1st, 2021. This theater will be reopening as AMC Fitchburg 18 in June