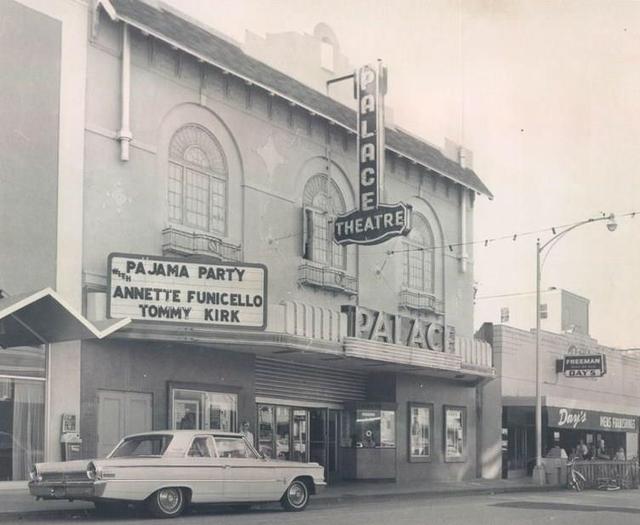 The Palace Theatre was opened on August 14, 1924 with 1,027-seats. By 1941 it was operated by E.J. Sparks, a subsidiary of Paramount Pictures Inc. It continued with that name until at least 1950, when it was remodeled by the Jacksonville based architectural firm Kemp, Bunch & Jackson.

It was remodeled again around 1965/1966 and became the Capri Theatre, reopening on February 16, 1966 with Anthony Quinn in “Zorba, the Greek”. The seating capacity had been reduced to 650-seats. from 1972 it became an adult cinema and closed following a police raid on March 25, 1975. It was boarded up in the early-1980’s and later demolished.

According to the University of South Florida the theater was located at 522 13th Street West and was previously called the Palace Theater. This page links to a picture of the Capri; it is undated but appears to be from the ‘70s. The theater was showing adult films at the time; here’s how it looked under the marquee, and here’s how it looked during the inevitable police raid. Here we have an undated picture from the opening of the Capri, with Miss Manatee County and Hernando DeSoto (or a reasonable facsimile).

This page links to a weekly listing from the Palace (not the Wallace as it says). Undated, but the films are mostly from 1926-27.

This one should be changed to Closed/Demolished.

I was an usher at the Palace from 1960 to 1961. An after-school job that paid 50-cents an hour. The manager was Harry Botto. It was the only movie theater in Bradenton after the near-by State Theater caught fire in the early 1950s. When the twin-screen Cinema opened in Bayshore Gardens in the mid-1960s the Palace lost most of its business.
The name changed to Capri in the early 1970s. It was a sad day when it was destroyed.

When I was about 8 or 9 years old (back in the early 1960’s), I would visit my grandparents in Bradenton. My grandmother would drop us off at this theater on Saturday mornings. We would have a BALL!! They really entertained us. We were issued numbered ticket stubs. A man would get up on a platform (in front of the screen) and would have a drawing for prizes. If your ticket number matched, you would win something really cool. Then they would show cartoons and the feature. We really looked forward to Saturday mornings there! And the moms probably looked forward to a little break from us kids (lol). I sure have fond memories of this theatre.

I’m trying to do research on the Lincoln Theater in Bradenton Fl. This theater was located on 109-9th Av West and was an African-American movie theater when my father managed it from 1959 to about 1965. It was demolished sometime during the mid to late 60’s.

This venue opened August 14, 1924 as the Palace,Theatre and converted to sound to say relevant. Gulf Coast Theatres took on the Palace and the theatre received a shocking makeover in 1965/6 removing all character and any originality from the building basically creating a new theater around its four walls. Theatre seating was more spacious and comfortable to a final count of 650 seats. It reopened after the refresh as the Capri Theatre with “Zorba, The Greek” on February 17, 1966.

Gulf Coast sold the fading venue in 1972 as movie goers were going to suburban parts of town with lots of free parking available. The theatre switched to adult cinema and was hounded by local officials. It temporarily switched formats to family films under a new name briefly before heading back to 16mm adult films and legal issues. Though cleared of all charges, the theater may have discontinued operations after being raided on March 25, 1975 with Patty Alexon in “The Female Vacume Cleaner” and Karen Delmar in “Satisfaction.”