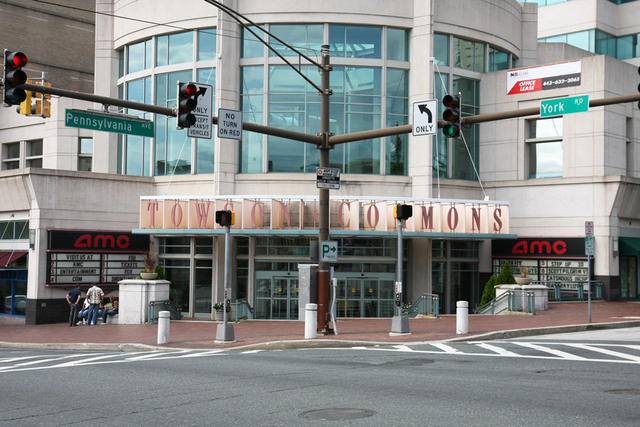 Opened May 22, 1992 by General Cinema as a replacement for the Perring Plaza Twin and (eventually) the nearby York Road Twin. The theatre is located inside Towson Commons, a mini-mall that has seen better days. (Towson Commons itself is in the very center of the Towson commercial district.) It has two identical levels with four screens on each; screens 2 (lower level) and 6 (upper) are largest with 368 seats in each. The auditoriums are in GCC’s typical all-red color scheme of the late-1980’s-early-1990’s.

The lower-level lobby contains a display with a cinderblock that was removed from the Perring Plaza Twin prior to its demolition.

At one time during the mid-1990’s GCC considered opening a bargain annex in the lower level of the mall (York Road Twin had been a dollar house in its last days), but that plan never materialized.

The Recher Theater (formerly the Towson) is kitty-corner from Towson Commons, across the intersection of York Road and Pennsylvania Avenue. It was closed on May 15, 2011.