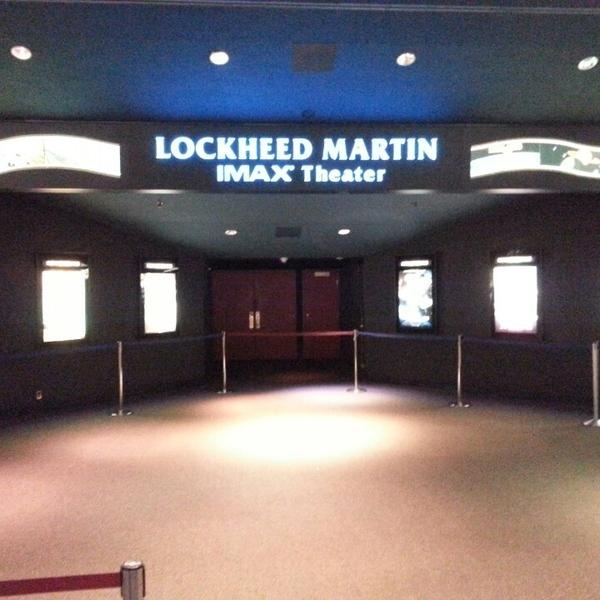 Located in the National Air and Space Museum. Opened on July 1, 1976 with the first major IMAX hit movie “To Fly” (which they still play sometimes), this theater is currently the oldest IMAX theater in the US.

SciFi Sundays screenings: May 1: Spaceballs May 8: The Fifth Element May 15: Men in Black May 22: Spaceballs (repeat, due to popular / sell out screening at the beginning of the month) May 29: Batman vs. Superman: Dawn of Justice June 5: Star Trek (2009) June 12: Star Trek: Into Darkness June 18: Star Trek II: The Wrath of Khan June 25: Inception

I saw that. Only the newer Trek films are in IMAX. I suspect Star Trek II is digital? And they’re charging the same $15 as the IMAX formatted NuTreks.

regarding tix pricing here’s what the Smithsonian recently stated:

“… if you bring in a ticket stub from a past #SciFiSundays film you can get your next film for just $10.”

RE: ST II. I guess the only way to find out is to boldly go and see it for myself. :) To be honest, my memories of the 70mm original theatrical run have always been in my mind more so for its soundtrack. Perhaps the DCP is from the newly released 4K remastering. It should look good in this theater. I’m hoping some of the sound fx are still there.

Anyone know if Rogue One will be played on Dec 16th? I will make the trip all the way from NYC if it’s playing here. The Lincoln Square Imax doesn’t look like it will be ready on time. I want to see this in laser.

Darth, it appears so. Check the Smithsonian’s webpage. It states that it opens here on Dec. 18. It should be spectacular. Supposedly, they filmed scenes in IMAX. Hopefully, it should look great here. Enjoy it and the museum exhibits, too. ^5.

and oh, check out the new Greg MacGillivray movie: ‘Dream Big’ – who knew that ‘engineering’ was a topic ripe for the ultra big screen & 3D.

I wasn’t able to attend this presentation/Q&A, but I thought I just add this special screening of ‘2001’ just for the sake of retaining it here on Lockheed’s listing:

This special screening will be introduced by, and followed by a Q&A with, legendary filmmaker and visual effects pioneer Douglas Trumbull, who created many of 2001’s stunning, Academy Award-winning FX sequences. Trumbull also earned Academy Awards nominations for his work on the sci-fi classics Close Encounters of the Third Kind, Star Trek: The Motion Picture, and Blade Runner."

Wow, I would have loved to have been there. He’s held various Q&As at a few places in the past few years. It would have been even better if he showed some of his HFR shorts he’s been working on like he did at the Seattle Cinerama venue a couple of years ago.

I found 2001: A Space Odyssey showing here tonight and attended the only showing. Film started promptly at 6:30, intermission at 8, resumed at 13 minutes. No previews or IMAX trailer, whatsoever. Just a prerecorded welcome announcement. The classical music played pre show was nice. One would think the theater would have had slide shows or commercials for the Smithsonian museums, but nothing. Even though today was a holiday, I paid $2 just in case. Fortunately, there was no ticket on my window given the 2 hr parking time max.

Movie was digitally disappointing. Color was not vibrant or sharp. The picture was ok, no transferred film artifacts such as scratches or spotting. In fact, the readouts looked dull. What I saw in the 70mm print at the AFI Silver such as the red veins in Bowman’s eyes in the bedroom suite scene showed a vein, not tree of veins. Bowman’s eye color in the closeups looked green in one scene, opaque in another. Ship/pod readouts were dull, worse than the 70mm print at the AFI.

Even though I’ve seen this film many times, I would always hope there would be a change to one scene. When Bowman rescues Poole, he returns to the Discovery but lets Poole’s body go to get into the ship through the manual airlock. Well…the pod has 4 arms with 4 hands. Bowman should/could have held on to Poole with two of the arms and still have the other two turn those dials on the Discovery exterior to open the airlock, place Poole into the chamber and then enter, himself, as in the film.

Having read of Kubrick’s obsession with perfection, he’d be rolling around in his grave to find this film digitally preserved and presented the way it was tonight.