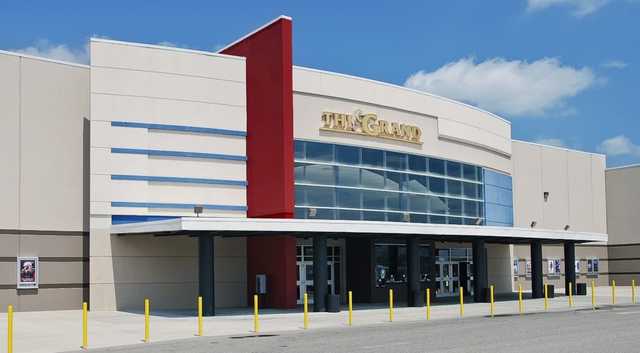 Opened around 2007, the Grand 18 Theatre has stadium seating, with high back rocking chairs. There is also a games room and speciality cafe.

The Grand 18! Hattiesburg’s gift to the cinema going crowd that attends the University of Southern Mississippi. I lived, studied and worked in Hattiesburg from 2007-09 and this theater had recently opened. The building itself is unimpressive from the outside. Just a box with the window-like vestibule entrance, yet very little signage otherwise, especially considering the building’s prime I-59 freeway overlook, since obscured. The building was constructed on a series of smaller lot parcels that once housed a number of smaller nondescript businesses and homes, that were paved over in favor of motels, specialty businesses and a large apartment complex catering heavily to University students. In fact there is no dedicated roadway entrance to the theater; only a series of oddly aligned local streets through neighborhoods. Someone told me, that the building was a product of Hurricane Katrina (2005) recovery funding earmarks and tax incentives. Developers then greedily, albeit hastily, constructed The Grand 18 sometime in late 2005 to early 2007. The theater itself was constructed with the then latest cinematic innovations in mind including stadium seating, and 3D digital projection, I saw films like Star Trek (2009), Avatar, Indiana Jones 4, and the 2nd, subsequently discontinued, effort in CS Lewis adaptions. By 2017, I would hope the theater’s owners have begun investitures, if only on paper, the latest cinematic fads like recliner seats, in theater food/alcoholic beverage service, and high end video and sound enhancements. Mississippi desperately needs the movie-going destination efforts that people in more affluent states take for granted.