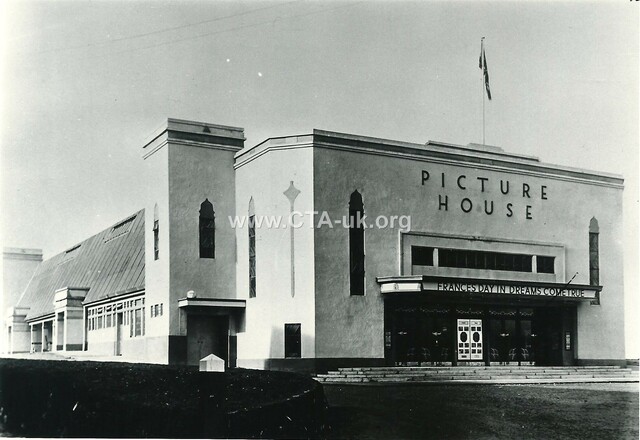 There was a Picture House in Bude which originally opened in either 1919 or 1921 (sources vary) and it had a seating capacity for 400. It was located off the High Street. In the early-1930’s it was enlarged to seat 614.

In 1936 a new Picture House was built at a different location close to the sea, with seating for 980. Designed in an Art Moderne style, the stand alone building had sharp angled corners on its impressive white painted facade. A really beautifully designed building. It had a 40 feet wide proscenium, a 17 feet deep stage and four dressing rooms.

Somebody has commented on Flickr – ref the above link – that they saw ‘Star Wars’ in this cinema, which surely wasn’t released until 1977, or even 1978 by the time it got out of London/Birmingham/Manchester?

I think I can shed some light on this, as my father was the manager-owner of the Picture House from 1976 to its closure in 1987.

The original post has made a couple of understandable factual errors. The Picture House was, indeed, “a really beautifully designed building. It had a 40 feet wide proscenium, a 17 feet deep stage and four dressing rooms”.

However, it was built in 1936. There was an earlier Picture House in Bude (built in 1919 or so) but that was a completely different and seperate building, just off the town’s High Street. (Our Picture House clung insanely to the cliffs by the beach).

The Picture House continued screening films in both houses until economic pressures led to its sale and demolition in 1987. It was not converted, rather razed to the ground and a new building erected.

In case anyone is interested, here are a few bits of memory and trivia…

The worst performing film ever at the Picture House was a tied contest between “Brazil” and “Dune”. Both played for one week with one audience member – me, and I didn’t even have to pay.

The film most hated by the staff in the 70s was “Jaws”, as the usherettes had to regularly mop up vomit after showings (we were, after all, just by the beach!).

The doors into the auditorium all had small windows built into them. During the run of “Carrie” every single member of staff would gather at the windows to watch the audience “jump up” at the final scene.

In June the whole staff would come together for a ritual, tongue-in-cheek, “prayer for rain” – that being the best and only way to get the tourists off the beach and into the cinema.

No Disney films were shown at the Picture House in the early 80s, after a slight (ahem) misunderstanding with the local Disney rep that left him with his fingers stuck in the lid of the boot of his car…

We broke (as I am sure did many other regional cinemas) the embargo on the national release of “The Empire Strikes Back”. It started an hour before Leicester Square.

Even after the conversion to a two-screen house, the cutting room behind the projection booth continued to be a library of rentals that, for whatever reason, were never returned – mostly bad prints of 1970s B-features. The Picture House motto for a midnight screening was “bang on a double bill of "Damnation Alley” and “Giant Spider Invasion”.

The Picture House was said to be haunted by the ghost of a projectionist called Fred. As it is impossible to be scared of a ghost called Fred, all odd occurances were met, by every staff member, with a weary “Fred, stop it”.

Because (I guess) the electricity supply in Cornwall in the 30s wasn’t reliable, the building retained a “generator room”, three floors below ground, until its demolition. The generator room still contained all the electrical switching gear for the building and I often visited it with my dad. I ascribe my total non-fear of rats to the casual way we would regard the bloated, near-albino rodents that absolutely thronged in legion below the building.

I hope this is of some interest!

Thanks for clearing up the history of the Picture House. I don’t suppose you have any interior photos of it?

I will be going through my the photos in my parent’s loft by the end of the year and will post whatever I can on here.

As well as being one of those people who jumped a mile at the end of ‘Carrie’ I had the privelege of playing on the stage there in our teenage band in about 1978. I think it was a show for the British Legion club. I have a cassette recording of the gig and it was monster!! As I remember, the diggers went in overnight virtually and the building was razed to the ground like a few other notable buildings in Bude without a ‘by your leave’. It was a tragic loss of a wonderful theatre with a wonderful interior. Not quite Cinema Paradiso, but a lovely deco pile nonetheless.

It became an International Stores, then a Somerfield and now Sainsbury’s. Lots of changes of hands. Perhaps it’s never quite worked as a supermarket site.

Thank you for correcting my original entry. The last time I saw this hall was some time around 1964. I therefore made my entry to Cinema Treasures mainly from memory and from news of its later demise provided by a friend resident in Barnstable. Even now, some forty-six years on, the image of the white and sharply structured facade is still clearly burnt into my mind. It was indeed a beautiful building and rightly fit for purpose.

A comment about cinema generators. Most of the pre mid 1930s cinemas used DC generators to power their arcs. These generators were usually located within the halls and had their motors in turn powered by AC mains electricity.

In my career as a projectionist (1960-75) I can only ever recall two cinemas that possessed motor driven DC generators – both of which had not been used for many years. In each case the generators were located in out buildings away from the main hall so that the noise of the engine did not disturb the performance and so that the exhaust fumes could easily access the environment.

Halls that possessed AC mains driven DC generators usually housed them within the hall, in many cases in a purpose built generator room at the back of the box (example Cardiff Globe) or alternatively in the same location as the air conditioning plant (example Penarth Washington).

I would think that by the late 1930s the use of mercury arc rectifiers had become common and the expensive to operate DC generators made obsolete. Better financed halls usually installed two mercury arc rectifiers each of which could power two arcs and sometimes a slide lantern as well. One of the two rectifiers being kept as a standby and the devices alternated each week (example Cardiff Monico and Plaza) Less well off halls installed one mercury arc rectifier and retained their DC generator as the standby system should the rectifier(s) fail. Kalee with the advent of their later series of Regal Arcs introduced smaller rectifiers which were capable of powering one arc. Each arc having its own rectifier located in a cabinet immediately behind the arc and switched on only when the arc was in use (Caerphilly Castle and Workmensâ€™ Hall). Usually most Kalee individual arcs were run on the medium rectifier setting with the rectifier being turned up to high when a cross wired lantern was additionally in use.

Long after the mains DC generators ceased to be used, they remained in halls corroding away. The reason probably being their extreme weight and the fact that it was too much of an effort, for too little a return, to move them.

Paragraph 2 of my recent entry re: generators should read…..

In my career as a projectionist (1960-75) I can only ever recall two cinemas that possessed engine driven DC generators – both of which had not been used for many years.

You know i Noticed the Vomit comment on “JAWS” we played it at the IMPERIAL in Augusta,Georgia and of the tens of thousands that came I recall one person throwing up and it was Heat related.It gets HOT in Georgia. I think and will always believe these Vomit stories are way too many, and not factual.

People vomited during Star Wars at the Odeon Marble Arch due to motion sickness. The staff had to shut the front few rows.