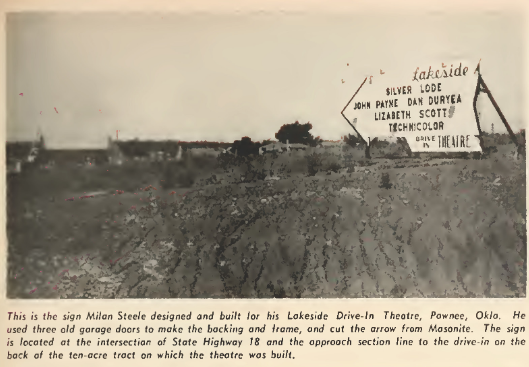 "This theater is not only still standing, but is in remarkably good condition. The field is quite overgrown and an encounter with a spider or snake is highly likely."

The comments above are actually about the Cleveland Lakeside Drive-In. Here is a current link to the Pawnee drive-in page, though little information is on it to this point.

The 1955-56 Theatre Catalog listed the Lakeside with a capacity of 200, owner Milan G. Steele. He was still listed as owner when the Lakeside finally debuted in the Motion Picture Almanac’s 1966 edition.

Steele wrote a scathing review of Hansel & Gretel (1954) on behalf of the Lakeside in the July 16, 1955 Motion Picture Herald. He wrote, “You would be better off not to play it, since a picture like this stops them from coming for a long time, and some may never come back after seeing such a thing.”

When the MPA resumed including owner info in 1977, it listed P. McCray. That continued through 1982. In 1983, the Lakeside fell off the MPA list.

The drive-in was located on the NE corner of the intersection. Today, it is an empty field and you can barely see the outline and hints of the ramps.

The Nov. 6, 1954 issue of Boxoffice ran a lengthy article, with photos, about Lakeside owner Milan G. Steele’s do-it-yourself approach to drive-in construction. “Incidentally, the new wide screen, 60x30 feet, replaced the one destroyed in a tornado last May 1.”

Boxoffice, March 12, 1973: “The Lakeside Drive-In, Pawnee, has been sold to Pat McCray and his wife Sandra by Mr. and Mrs. Milan G. Steele, who built the airer in 1953 and operated it continuously as a family theatre. The family policy will be carried on by the McCrays, who also own the Pawnee Western Auto Store.”