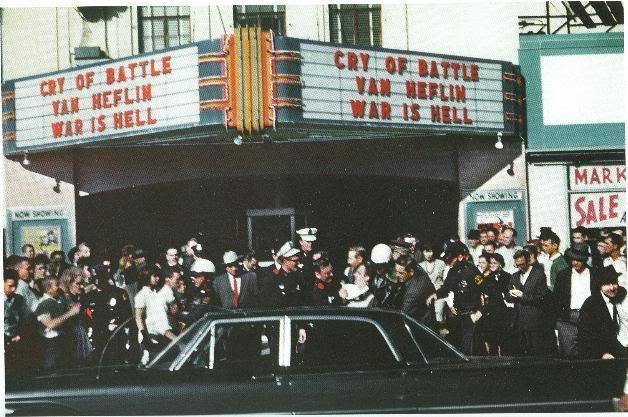 Located in the Oak Cliff suburb southwest of Dallas. The 920-seat Texas Theatre opened on April 21, 1931. It has an Atmospheric style interior, with silhouettes of Spanish looking buildings all around the sides and a ‘sky’ above. The ‘sky’ would begin to darken, then turn to twilight, then dark. Stars would begin to appear and a machine projected clouds across the sky. A 2 manual 6 rank (72 pipes in each rank) Barton Theatre Pipe organ was installed in 1931, transferred from the Midway Theatre down the street. The organ was later removed and sold to an individual. The Texas Theatre was a popular movie house and community center for decades. It is best known as the place where Lee Harvey Oswald was captured by Dallas police on November 22, 1963, after assassinating President John F. Kennedy.

In the subsequent years after the assassination of JFK, the neighborhood took a turn for the worse, affecting the theatre. United Artists closed it in 1989. Director Oliver Stone remodeled the exterior in 1990 for his film “JFK”. The theatre faced demolition, and a fire nearly destroyed it in 1995. In 2001, with a grant from the city of Dallas, the Oak Cliff Foundation bought the shuttered theatre for $400,000. Plans were to refurbish the theatre to the historical period of 1963, and use it to host musicals and stage shows. Recently the theatre has been used to show movies and for special events. A full restoration was completed and the Texas Theatre officially reopened on December 10, 2010. On September 1, 2021 after 10 years of plans, the 165-seat auditorium in the long closed former balcony was opened with a 40ft wide screen, the same size as the main auditorium screen. The balcony screen is accessed thru the original balcony stairway which has been closed for 40 years, and also via an elevator. The main auditorium now has a small VIP mezzanine seating area.

The Texas Theatre was added to the National Register of Historic Places in 2003.

Article about a current fundraising effort. Copy & paste to view.

Do any photographs exist of the inside of this theater from before its was stuccoed over?

I was born in dallas,texas when i was little girl i use to watch movies there.

Who (person), or what (company) owned Texas Theatre on November 22, 1963? I cannot find any information anywhere on the Internet.

Per Jim Foster, accompanied a 1937 photo I just added:

“Television was still in its infancy in 1932, so neighborhood theaters like the Texas Theatre on Jefferson Street in Oak Cliff, which opened in 1931, were commonplace. It was the first theater in Dallas to feature air conditioning and being built later than most of the movie houses of the 1920s boom, had the latest projection facilities.

The original owner was a company belonging to Howard Hughes. A nickel would buy an afternoon or an evening’s entertainment in a comfortable, air-conditioned environment."

Worked with Corgan Architects to add an second screen upstairs in 2021.