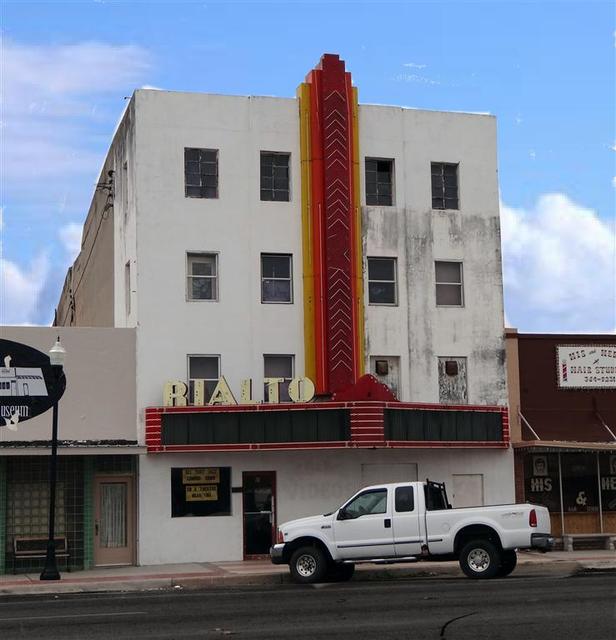 The original Rialto Theatre opened in the 1920’s and closed on August 14, 1936 (it has its own page on Cinema Treasures). It was replaced by a new Rialto Theatre, opening August 15, 1936 with Hugh Herbert in “Love Begins at Twenty”. It was designed by architect Harvey P. Smith. It was badly damaged by a fire around 1944. It was rebuilt and reopened November 16, 1945 with a much larger seating capacity.

The Rialto Theatre was still operating into the 1970’s. After closing the building was used as a video store. The building is currently vacant.

Here is another photo:
http://tinyurl.com/lt49pu

The Rialto was rebuilt in 1945. The November 24 issue of Boxoffice said that “Henry Hall reopened his Rialto Theatre in Sinton on November 16. The house which was recently damaged by fire has been completely rebuilt.”

The August 11 issue of Boxoffice had said that the old Rialto had been almost completely razed by the fire, and that the new theater was being decorated by the King-Lewis Studios of Dallas. The walls were to be painted with murals depicting the evolution of navigation from the canoe to the Queen Mary. The front of the building would feature glass brick, neon, and indirect lighting. The Rialto was operated by the Hall circuit, headquartered in Beeville, Texas.

The Rialto at Sinton dates back to at least the 1920s. The September 22, 1928, issue of Motion Picture Times ran an item about the Hall Brothers, mentioning that they operated theaters called the Rialto in the Texas towns of Sinton, Taft, Three Rivers, Kenedy, and Beeville. The Beeville Rialto was the circuit’s first, and by then had been operated by the Halls for six years.

Does anyone have information about The Sinton drive-in. I have the location from Google Earth historical imagery on Hwy 77 just south of the town. I don’t know when it opened or who operated it.

The theater doesn’t look very well now. The lobby appears to be a junk store or storage place with some veterans posters on display. Part of the roof may have collapsed.

The New Rialto Theatre opened August 15, 1936 with the film, “Love Begins at 20.“ On Wednesday, March 15, 1945, a fire gutted the auditorium taking the life of a theatre employee who tried to douse the flames. The former Rialto turned Rex was the main movie house for the community changing films four times a week.

Hall Industries requested permission to rebuild the Rialto from the War Production Board. It got the go ahead and rebuilt the third Rialto auditorium with superior fireproofing relaunching November 16, 1945 with “Hold that Blonde”. The auditorium now held 800 people and the building was a story taller than its predecessor.