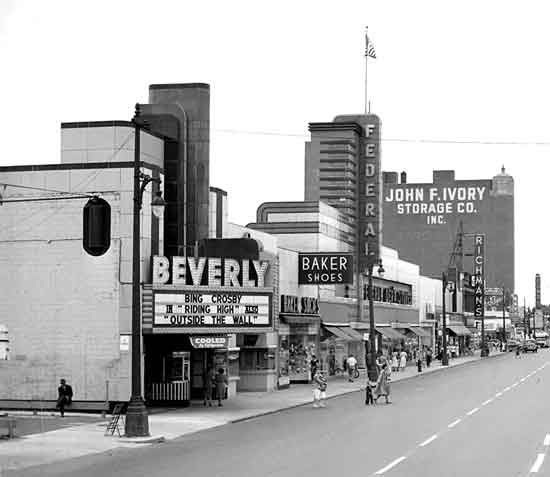 The Beverly Theatre opened August 27, 1937, for Mamie Kogan and Robert Silberstein. It was designed in Streamline Moderne style by Charles N. Agree and could originally seat about 1,475. The Beverly Theatre was erected in less than four months, and cost close to a quarter million dollars to build. It later was operated by the Wisper & Westman circuit.

The theater was closed in 1964 and sat vacant until 1981 when it was became home to a church. The church occasionally hosts live stage events and concerts.

The Beverly is currently serving as a church facility after being brought back into service in 1981. It changed hands in the mid 90’s, and was purchased by the current owners in 2002. Occasional theatrical productions, concerts, and dance performances are also now given. The auditorium is basically unchanged, with the exception of a stage area being built as an extension of the original stage. The seating is now approximately 1300 to accomodate the new stage and audio mix areas. The original flooring remains in the entrance and concession areas, as well as the decorative treatments in the auditorium. Part of the original construction included an adjacent store, which has now been integrated into the facility as a dining area on the main level, and children’s classrooms on the lower level. The structure has 5 staggered levels, two of which are below ground (not including the boiler room). Pictures will be forthcoming in the next few months.

Do you have the pictures yet?

The interior may have very little changes but the nice art deco facade is no-where to be found, hah.

Thanks for the link.

There are some photos of the old facade here:
http://tinyurl.com/2qtgxa

On this web page is a good photo of the Beverly taken in June of 1950 View link
The trolley cars have been taken off Grand River River Avenue and the neighborhood has slowly begun it’s period of decline.