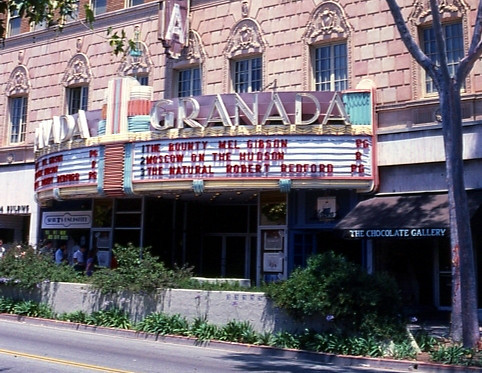 The Granada Theatre is Santa Barbara’s oldest standing movie palace, opening on April 9, 1924, and is the tallest building in the city.

The eight story building that surrounds the theatre belies the Spanish architecture that lies within. By 1941 it was operated by Warner Bros. Circuit Management Corp. Although the theatre was triplexed under Metropolitan Theatres, in 2006 the Granada Theatre was returned to its original appearance as a single screen theatre but everything beyond the proscenium, including the stage house was demolished and rebuilt. Reopening on March 6, 2008. It mixed movies and shows into its lineup. By 2019 movies had been dropped from the programing.

The theatre is now best known as the home of the Santa Barbara Civic Light Opera.

If you have memories of the old Granada, please send them to:
http://www.granadasb.org/contact-us.asp

We’ll put the best ones up on our website!

The Granada was reborn on March 6, 2008, with a Gala event, highlighting the theater as the new home of the Santa Barbara Symphony, Santa Barbara Ballet, Santa Barbara Opera, Community Arts Music Association, UCSB Arts & Lectures, and three producers of Broadway shows. The architectural restoration is a masterpiece, and the acoustics are remarkable.

One of my favorite memories is my grandmother taking me to see “Mary Poppins” at this theatre in the 1960s. I will never forget it. And then we saw “The Sound of Music” at The Arlington. Two fantastic theatres.

Anyone have some good photos of the theater before the big vertical Granada sign was installed? I know during the 40’s and 50’s it was the Warner theater. The first movie I remember seeing there Hard Days Night in the 60’s. I also remember seeing THX1138 there before anyone knew who George Lucas was.

1967 photo added courtesy of the AmeriCar The Beautiful Facebook page.

Vimeo link with the history of the Granada.

According to Rudy Behlmer’s audio commentary on the Legacy Collection DVD The Granada Previewed the original Frankenstein on October 29th 1931.