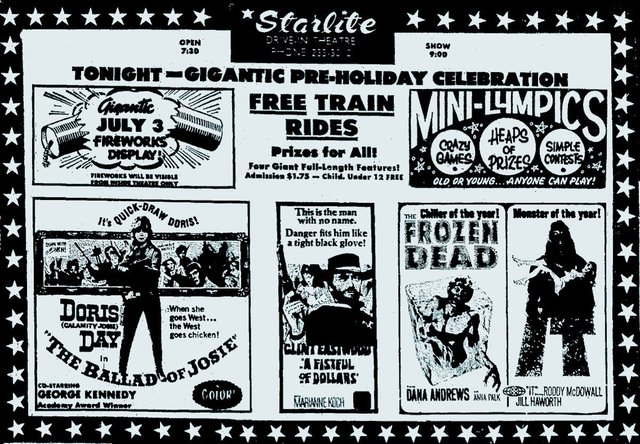 The Starlite Drive-In was the first drive in the state of Iowa, opening on September 12th, 1947 with Edmund Lowe in “The Enchanted Forest”. The back of the screen tower had "Starlite Drive-In" spelled out in blue neon and a red & yellow blinking neon star in the upper right hand corner.

Rod, it was owned by Starlite Drive-in Company and parked 700 CARS ! making it one of Iowa’s largest outdoor screen.

Boxoffice, Nov. 19, 1955: “Stephen A. Oellerich has sold his interests in the Starlite and Skyvue drive-ins to the Central States Theatre Corp., effective December 1. The Starlite was built in the summer of 1947 by Oellerich and Philip E. Winslow - the first drive-in in Iowa. Two years later they built the 600-car Skyvue on the east side of Waterloo. Central States purchased Winslow’s interests in both theatres in June 1954.”