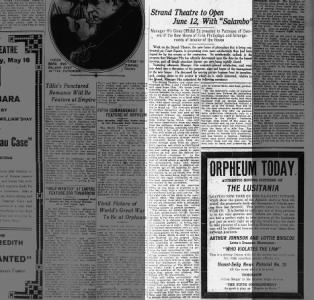 A May 30, 1915 article in The Montgomery Advertiser said that the new Strand Theatre occupied a building formerly occupied by the Empress Theatre and a drug store. The two spaces had been thrown together to accommodate the larger theater. The Empress was one of ten Montgomery picture houses listed in the 1914-1915 American Motion Picture Directory, but the October 21, 1910 Advertiser had announced its grand opening, scheduled to take place that afternoon.