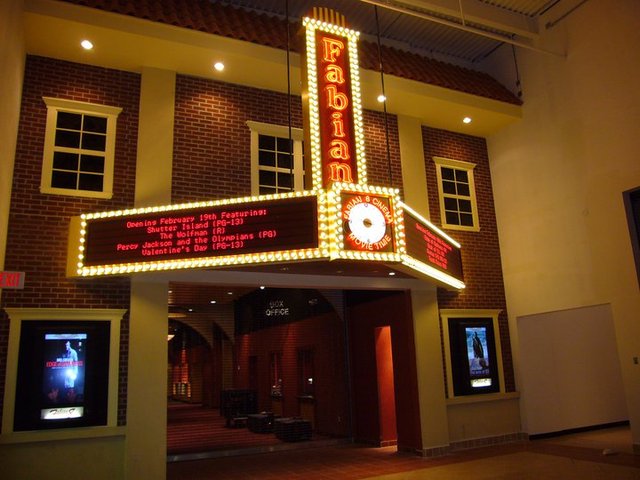 New build in downtown Paterson, NJ, it is located in the Center City Paterson Atrium.

I hope the print they showtimes tomorrow . Im planning to attend this weekend

A grat monden cinema. Excellant presantation. the have 2 consession stations opposite of each other .In the bigger theaters the entrance is at front of the theater insted of entering from the back and walk down the ailies to the staduam seating … The front of the theater has the look of a NYC townhouse , with the marquee in the middle

Agree with Fred, impressive presentation, large screens, comfortable seats and a very friendly staff. I caught the 1PM show of Brooklyn’s Finest in theater 8, the biggest theater in the complex. The layout is: 1 and 2 are to the right along with the men’s room, the box office, 7 and 8 and the women’s room are to the left. There are two concession stands opposite each other and 3 and 4 are to the left, 5 and 6 to the right following that. The staff keeps the theater spotless, and on the way out at least two asked if we enjoyed the movie and wished us a good day.

The place’s interior design reminds me a bit of the new Clearview look (reds wall paper and carpet), but the theater has top of line sound and an extensive use of LCD monitors even at the auditorium entrances, box office, concession and a few video poster cases.

Theater 8 is large with an entrance at the front of the theater, after walking down a hallway. Stadium seating and comfortable, wide seats along with good projection and sound. This is a great new theater, no expense was spared in building a complex that easily rivals Clifton Commons and the theaters in Wayne and its a bit cheaper. Parking was free for a few hours and the lot is brightly lit below, the mall itself is still a work in progress so I can’t wait to return when we’ll have more dinning options. Security while visible is not annoyingly so as you’d find in some other urban complexes. The theater’s smallish lobby might be an issue during more popular films but they seem to be set up to accommodate the traffic.

Another great feature is next door is the Paterson Art Gallery, an open, non-intimidating space that encourages families and mall visitors to come look around. This and the mall/entertainment complex is a great thing for Paterson and so far Center City looks to be a success, hopefully it’ll get a few more dinning options soon (Buffalo Wild Wings, which had been part of the original plan would be awesome).

Sound and Digital Conversion at the Fabian 8 Cinema. Work started on converting all 8 houses to digital expected to be finished by mid March 2012. More RealD 3D and new screens from Big Sky Industries. Theatre 5 is now a beta test location for Danley Sound Labs new cinema loudspeaker line. Designer Tom Danley is responsible for the volcano effects at the Mirage in Las Vegas and built the worlds largest subwoofer, The Matterhorn, with 40,000 watts of energy. Your innards jigggle during extreme special effects. High frequencies are spacious and superbly clean. Fabian 8’s theatre 5 may currently be the best sounding cinema space in the NY metro area.

Ear bleeding volume level! hence the reason this fabulous theater is always a ghost town. And do not ask Kumar to turn the sound down because you will be met with hostility and insult and then givin a refund and being told security is coming. Which we waited for they did not. So sad

Where’s the listing for the original FABIAN theater on this site?? They too it down?