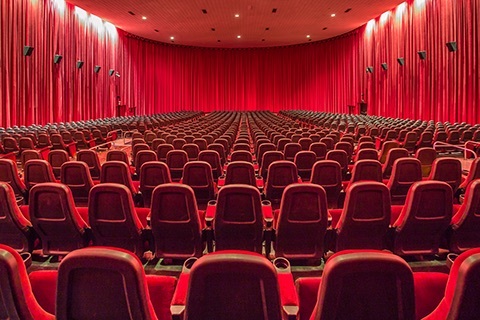 Opened February 11, 1969, with 1,130 seats and a 71-foot screen, this was among the last of the large theatres built in Southern California before the advent of the multi-screen shoeboxes in the early-1970’s. It was the fourth theatre built by the growing Edwards chain and for many years it was considered their flagship.

In the 1970’s and 1980’s, two smaller screens were added on either side of its building, keeping the original auditorium intact.

Edwards' corporate offices were in the second story of one of the newer theatres and anyone who attended a matinee would probably see James Edwards II, the chain’s founder, greeting patrons. He came to work daily until his death at the age of 90.

In 1996, three stadium auditoriums were added to the building but the Big Newport, with its non-stadium seating, has defied trends and still continues to draw crowds. The total seating capacity was for 3,000. The Big Newport has a loyal following of fans who camp out or at least show up for the first day of the big movies.

Big Newport was among just eleven theaters in the United States that installed the then-new Dolby Digital sound system for their engagement of “Batman Returns” which opened twenty-five years ago today. And here’s the link to a retrospective article that commemorates the occasion.

The Big Newport’s rather austere new auditorium interiors can be seen in this slide show on the web site of the firm that designed the remodeling project, BB Architects.

Starring Albert Finney, Carol Burnett and newcomer and Aileen Quinn as the titular heroine, the film rolled out slowly on just 14 screens opening weekend, but it had the highest per-screen average ($36,474) of any other release, beating out “Conan the Barbarian” & “The Road Warrior.”

It would go on to gross $57 million against a $35 million budget, finishing its run as the 10th highest-grossing film of 1982.

I saw it opening weekend at the Big Newport as a kid & thought it played pretty well on the 71-foot screen.

Love that this is being kept intact and draws a crowd. Would love to see pics when the curtain is open. Do they still have masking?

Starring William Shatner, Leonard Nimoy & Ricardo Montalban as the titular villain, the film opened at number one with $14 million (the largest opening weekend in history at that time) on over 1600 screens, grossing $79 million and finishing its run as the 6th highest-grossing film of 1982.

The film is still widely considered the greatest Trek film ever made.

Actually Rocky III’s $16 million opening weekend the week before was the largest in history at that time. My bad.

Starring Gary Oldman, Winona Ryder & Anthony Hopkins, the gothic thriller debuted at number on over 2,400 screens with nearly $31 million its opening weekend (a then November record), grossing just shy of $83 million in North America & finishing its domestic run as the 15th highest-grossing film of 1992.

My then-girlfriend & I caught the film on the big screen that first Saturday night (after attending a co-worker’s wedding) and remember being greeted with a line down to the street, a regular occurrence for event films opening weekend.

Starring Tom Cruise, Demi Moore & Jack Nicholson, the military courtroom drama debuted at number one on nearly 2,000 screens and held the top or number-two spot for the next six weeks, grossing over $140 million in North America & finishing its run as the 5th highest-grossing film of 1992.