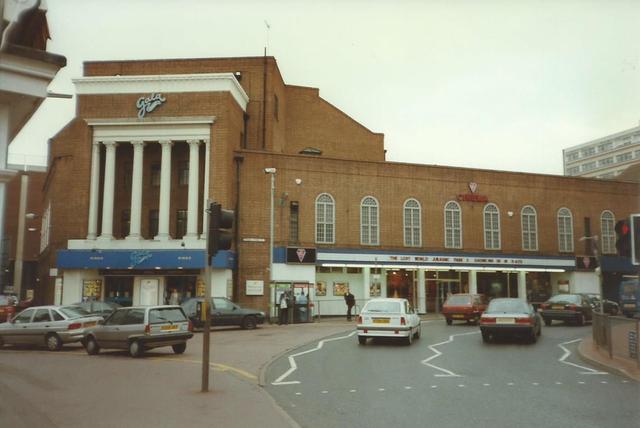 The Granada Theatre opened on 10th January 1934 with Tom Walls in "Cuckoo in the Nest" and John Barrymore in "Reunion in Vienna". Organist Alex Taylor opened the Christie 3Manual/8Ranks organ, which had a French style console. There was a stage, but no fly tower for scenery. There was a popular café-restaurant, and a car park.

The interior was designed by noted Russian theatre set designer Theodore Komisarjevsky. There were three decorative grilles on each side of the proscenium, which had a narrow frieze across its top, depicting charioteers.

The Granada Theatre was closed on 15th September 1968 due to flooding, and it re-opened the following week, using the 650 seat circle area only. The building was closed in April 1971, for conversion by the architectural firm George Coles & Partners, into a Granada Bingo Club in the former stalls area and a twin screen cinema in the former circle and former café, using a new side entrance. Granada 1 & 2 opened on 26th December 1971 with 560 & 90 seats. The cinema was tripled, by twinning the former balcony in December 1974, with seating now provided for 258, 259 and 90. The Christie organ was removed and shipped to Australia, where it now resides at the Kelvin Grove High School, Brisbane.

Taken over by the Cannon Group in January 1989, it was re-named Cannon, it became the MGM in May 1993 and Virgin from July 1995. In May 1996, it was taken over by ABC and was closed on 15th April 1999. The bingo club still remains open in the former stalls area, and the building is now owned by Gala Bingo.

Several plans have been proposed for the the former cinema spaces since closing, which include a youth club, shops and a theatre company, and a Wetherspoon’s pub, but these never materialised and the upstairs cinemas remain empty and unused.

I hope I have put the correct picture on.. Granada are too alike..

I play the organ formerly of this theatre on a regular basis and over the past 13 years have spent many hundreds of hours in it’s company, much of the time thinking of its former home. This picture is new to me and gives a more intimate look at the theatre. I’m glad to say the organ now enjoys a growing reputation as one of the finest sounding Christie cinema organs anywhere in the world. There is still mention of the theatre amongst our society and we were lucky to meet some former theatre staff in the last 10 years.

Maidstonechristie, Do you have any good photos of the inside of the cinema and the organ? Kim