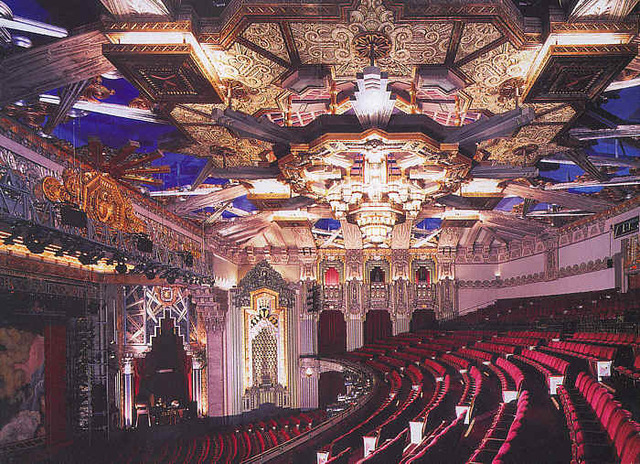 The Pantages Theatre came to life on June 4, 1930, under the leadership of Alexander Pantages, and cost $1.25 million to build (excluding theatrical and projection equipment). Opened as part of the Fox West Coast Theatres chain, the Pantages Theatre was one of the first movie houses to be built after the advent of talking pictures and once boasted the most elaborate sound system in the world. It opened with Marion Davies in “The Floradora Girl” on screen, and “The Rose Garden Idea” a Franchon & Marco stage revue.

The grand lobby is a magnificent poly-chromatic fan-vaulted space, that is 110 feet wide and 60 feet deep. It is decorated in a zigzag geometric design in gold and henna shades. At each end is a 20 feet wide stairway, lined with vaguely Egyptian and Assyro-Babylonian styled statues, one of which depicts in an Art Deco style, a camera crew filming. The entire area was illuminated by three huge Moderne frosted glass chandeliers hanging from three star-shaped domes. Beneath the grand lobby are the rest rooms and lounges. The ladies lounge and powder room is decorated in black patent leather walls and hung with bevelled diametric shaped mirrors and a silver leaf ceiling. Unfortunately, the gentlemen’s lounge beneath the right-hand grand staircase was sadly, in recent years converted into theatre offices and the original furnishings vanished.

The auditorium was designed to seat 3,212, but it opened with extra legroom and wider seats to give more comfort for its 2,812 patrons. The proscenium is 54 feet wide. Above the proscenium are three painted panels depicting Apollo leading his snorting steeds, California oil riches and Native Californians. The original safety curtain has a painting of billowing clouds and a flock of flying birds. Unfortunately the original house curtain was lost in a fire many years ago, ignited by sparks from the music stands in the orchestra pit. Its design depicted the evolution of man, art and architecture. On each side of the proscenium were originally two small side-stages, used for novel effects. These are flanked on the side-walls by the enormous organ chambers, in which it was proposed to install the largest Robert Morton organ ever built, but this was eliminated at the last minute. The huge orchestra pit was on an elevator, and the stage, measuring 180 feet wide and 70 feet deep is the second largest West of Chicago, after the Shrine Auditorium in downtown Los Angeles. The crowning beauty of the dazzling Art Deco style decorations which cover almost every inch of the theatre interior, by interior designer/muralist Anthony B. Heinsbergen, is the double ceiling made in a series of ‘busy’ fretwork sunray effects which converge from the center, from which is hung a tremendous frosted glass and bronze chandelier. Above all this is a blue sky ceiling, with twinkling stars. The Pantages Theatre is one of the most lavish movie palaces designed in the Art Deco style in the United States, and is Designated an Historic Cultural Monument.

In 1949, Howard Hughes, through RKO Pictures, acquired the theatre as part of his national chain of movie houses. It was renamed the RKO Pantages Theatre, with the name ‘Pantages’ retained due to a contractual stipulation. Howard Hughes had his office and own private screening room on the second floor of the Pantages office building which fronts the theatre. From 1950-1959, the RKO Pantages Theatre received its highest profile assignment as it was used as the location for the annual Academy Awards ceremony.

When Universal Pictures booked the Pantages Theatre for an exclusive 70mm Roadshow run of “Spartacus” in 1960, they insisted on several ‘improvements’ being carried out, prior to the movie’s opening….The seating capacity was reduced to 1,512 by means of curtaining off the side seating sections in the orchestra level, and curtaining off the rear section of seating in the balcony. In the grand lobby, a large concession stand was built in the center of the floor and the three chandeliers were removed from the ceiling. The outer lobby was also ‘modernised’, by covering the marble and bronze walls and hanging a low false ceiling. The original centrally place paybox was removed and a new box office installed on the right-hand wall. The West Coast premiere run of “Spartacus” began on October 19, 1960 and ran for 61 weeks into 1961. The West Coast premiere run of “Cleopatra” opened on June 19, 1963 and ran for 72 weeks into 1964. Other 70mm Roadshow runs at this period of time were “Tora, Tora, Tora” for 35 weeks, “Patton” for 23 weeks, “Sweet Charity” for 20 weeks and “The Great Race” for 19 weeks.

Pacific Theatres, known at the time for its large inventory of California drive-ins, purchased the Pantages Theatre from RKO in December of 1967 (after leasing it for two years beginning in 1965) and they did some refurbishment, including the removal of the curtains in the seating areas erected in 1960. This allowed the auditorium to be fully viewed again. They operated the aging movie palace until it closed as a movie theatre in January 1977.

Unable to fill its seats with motion pictures, Pacific Theatres teamed up with the Nederlander Organization and the theatre was restored to nearly its original seating capacity (almost 2,700) for a new live theatre run of the smash Broadway show “Bubbling Brown Sugar”. This was followed by productions of “Beatlemania”, “Man of La Mancha”, “La Cage Aux Folles”, Ann Miller & Mickey Rooney in “Sugar Babies” and Yul Brynner in “King and I” to name a few. It was also used for special events, including Elizabeth Taylor’s birthday/benefit for AIDS. Projection equipment is not currently installed and an apartment and offices on the second floor of the Pantages Theatre occupy those areas today.

The Pantages Theatre sustained some earthquake damage in the 1994 Northridge earthquake, and three months of restoration work was carried out on the ceiling details and damaged portions of the artwork.

The Nederlander Organization beautifully restored the theatre in 1999, spending a reported $12 million to bring back all of its palatial opulence. The Pantages Theatre reopened, better than ever, on September 28, 2000 for the West Coast premiere of Disney’s live production of “The Lion King” and this continued to fill its seats with the acclaimed and award winning production for several years. It has been followed by the “The Producers” and an equally popular production of “Wicked”.

On February 29, 2020, the vertical blade sign was removed from the front of the building to be repaired & renovated. It is planned to be re-instated in 2022. However this was not the case as the sign was deemed beyond repair and a new sign was installed on March 5, 2020.

The auditorium was much as it is today. The stage remained covered and the upper balcony was closed off. Then there was that horrible tile and dropped ceiling of the ticket lobby. That remained until Disney restored the theatre for Lion King. The “improvements” were all done so they could be reversed later on, though I doubt that’s what they had in mind.

i recently got the Blu-ray disc of The Great Race which has always been my favorite of the large scale action comedies released in the 60s. if I am not mistaken TGR played at this theater in a traditional roadshow engagement which lased I think between 5 and 6 months.

did anyone happen to see it during said run?

The May 9, 1960, issue of Boxoffice featured an article about the remodeling of the Pantages which had been completed the previous year.

I only ever attended the Pantages after this remodeling took place, and have not been back since the restoration done some years ago by Nederlander, so I remember the house looking pretty much like it does in the photos with this article. Even with the proscenium hidden behind the gold curtains and the 55x27 foot screen the auditorium was very impressive.

Rogue One: A Star Wars Story is having its world premiere here in less than an hour.

Multiple photos of the Pantages sign on VJ Day in below link.

The outside of the theater was used for the latest QT movie.