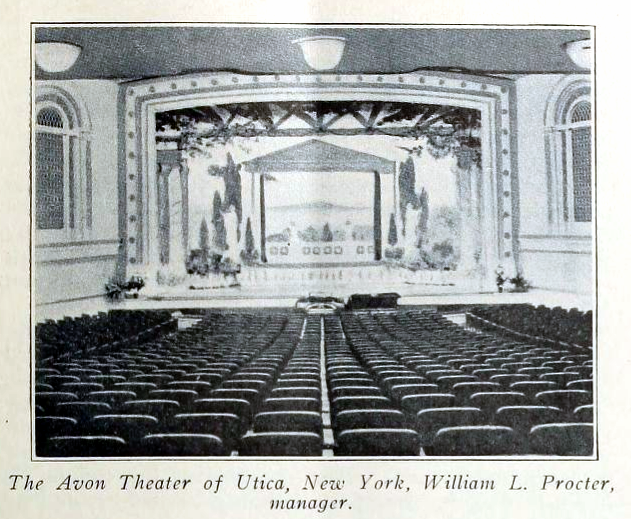 The Avon Theater dates back to 1915. It was remodelled in 1929 to the plans of architect Victor A. Rigaumont. By 1941 it was operated by Warner Bros. Circuit Management Corp. The Avon Theater is still listed in the 1955 Film Daily Yearbook.

The Avon closed in late 1965. In June of that year “My Fair Lady” was presented on a reserved performance basis. It was shown in 35mm, but magnetic sound was installed, but no surround speakers. The movie ran for 15 weeks-the longest ever at the Avon. Through the years, the theater was part of the following chains: Robbins, Fox, Schine’s, Stanley Warner (being the last).

To Lost Memory: I live in the Utica area and there were 2 Orpheum theaters. The old downtown theater on 34 Lafayette Street and a later theater on the corner of South and Miller Streets at the fringe of the Cornhill section of the city. The second theater closed on 6/12/53 and was part of the Kallet theater chain. The original Orpheum was located in the Majestic Hotel building on Lafayette Street which also housed the larger Majestic Theater. The old Orpheum was on the second floor of the building and the Majestic on the ground floor. The area that the hotel was built upon was originally the Utica Opera House. I hope I clarified this. for you

I just looked up some info. in my Avon folder. The theater was opened on 11/24/1915 with Ethel Barrymore in The Final Judgment. The first Vitaphone (talkie) film in Utica was shown there on 4/21/28. Gone With the Wind moved there from the Stanley on 2/16/40. Both the Stanley and Avon were part of the Warner chain at that time along with a third theater called the Utica which was actually larger than the Avon. The Avon closed on 12/7/65.

I’m looking for photos / programs information regarding the Majestic Theater in Utica.

One of my ancestors was a “solo cornet” player there for several years at the turn of the century.

BTW- There was an old Concert Program from the Majestic (1907)on an auction site recently. I have the scan of it if anyone is interested.

The Utica Observer of November 23, 1915, ran an ad for the Rudolph Wurlitzer Company which claimed that the organ installed in the Avon Theatre was “…an exact duplicate of the one which received Gold Medal of Honor at the Panama-Pacific Exposition.”

There are several articles about the Avon in issues of the Observer right around the time the house opened, and they can be found in the database of New York (mostly upstate) newspapers at the rather misleadingly named web site Old Fulton NY Post Cards. I read several in vain hope that the name of the architect would be mentioned. If it was, it must have been in one of the blurry sections that inevitably plague scans of old newspapers.

“The Avon closed in late 1965. In June of that year "My Fair Lady” was presented on a reserved performance basis. It was shown in 35mm, but magnetic sound was installed, but no surround speakers."

I visited the Avon booth in October, 1965 and there was no evidence of magnetic sound. The Super Simplexes had been replaced with Brenkert BX60’s for the MFL run though.
The architects for the Avon were Green & Wicks.

The following website has a couple of photos of the old Avon Theatre, published in 1916, shortly after the opening in 1915.

The Motography magazine of 1 April 1916 says it opened the previous year, so that would be 1915, with a screen of 13x18 feet and a throw of 88ft. It also had a large organ. It’s also mentioned that there were 7 or 8 houses in competition at the time but that the Avon had the largest business.

The 1929 article in Motion Picture News that Tinseltoes linked to earlier was written by Victor A. Rigaumont, architect of the remodeling job that had recently been done at the Avon Theatre.