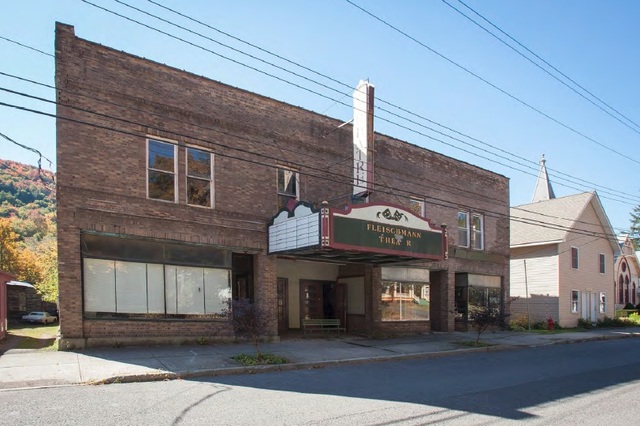 Opened in 1929 as the Maxbilt Theater. By 1941 it had been renamed Whipple Theater and by 1950 it was operated by the Kallet Theaters Inc. chain. It later operated as the Onteora Theater. It is located one mile from Belleayre Ski Center and the new proposed Belleayre Resort (golf courses and hotels). The theater is 25 minutes from Woodstock, N.Y., and 2 ½ hours from New York City. It is currently for sale on eBay.

The Village of Fleischmanns is growing. The Belleayre Resort project was just approved, as announced by the Governor himself on Sept. 5, 2007. This project also calls for the expansion of the New York State run Belleatre Ski Center. Rumor has it that a ski lift or gondola will come right down to Fleischmanns. No longer a “ghost town” , Fleischmanns will be at the center of all of this. For further infomation look at www.fleischmanns.org

But do they have a butcher shop?

As I mentioned before this theatre is a tough call. If one were to buy the theatre pretty much it and the whole town of Fleishmanns is depending on just about all of it’s business from the Belleayre resort. That sits a bit uneasy with me. Having income coming primarily one attraction is not a good thing. For one, what happens if Belleayre shuts down? Fleishmanns will go right back were it was. Also as I mentioned, this theatre is mostly suited for live shows and Belleayre already has this ground covered with it’s summer tent shows. Sure you could just run movies out of Fleishmanns, but pretty much anyone that knows me here, knows my take on movies. There just isn’t any money in it anymore unless you have a large multiplex. So for those interested in this theatre…be careful it is a very risky project. Of course if you are willing to take the risk and have the extra $ laying round, I think this could be a nice project. While I don’t care for the location, the theatre itself appears to be very nice. In addition it has apartments and store fronts as well. If I were able to move this theatre to a better location, I would, because that is how much I like the layout and concept. Overall it is a single level theatre (the front is two floors), with a large overhead attic space. Maintenance looks pretty easy once the initial renovations are complete.

Hi, this is Julienne Pape with Prudential Rand Commercial Real Estate. I am marketing the Fleischmanns Theatre. The theatre comes with three retail stores, apartment, and studio/flex space. The apartment is stately with 14' high tin ceilings, wood floor. Great opportunity to live/work. One retail could be an Expresso shop, the others, galleries. The rent would cover the mortgage! The theatre is beautiful, new upholstered seats, lots of historic details, and xenon bulb, platter system for wide screen movie.

Belleayre/Fleischmans is a four seasons area. The newly approved resort will have a golf course and 800 upscale houses. The ski area is doubling in size and will have a lift going right into the village of Fleischmanns. The Esopus Creek is renowned for excellent trout fishing and great for kayaking, tubing. Nestled in the Catskill Park, hiking and biking are superb. Plans to put outlet stores in Fleischmans. They are calling this the “Little Aspen of the East”.

The Belleayre Summer Music Festival is a big attraction and will be expanding. The theatre with live performances and art films will be an added attraction. The owner will hold some paper. Call me for new pricing. 845-943-0610.

Here is the loopnet listing. The marquee is missing a few letters, I think:
http://tinyurl.com/yvz7p3

No thanks. It snowed in Seattle on Christmas day, and that was enough to hold me for another twenty years or so. Bleh.

Just traveling down memory lane and discovered this site, so would like to add some information.

First of all, Good Guy In NYC (5/21/2005) is almost correct on the theater history. The original name was Maxbilt and it was built by Max Silberman and did open in 1929. My parents purchased it from Max or the Silberman family in 1950 and changed the name to The Onteora Theater as the road had the indian name of the Onteora Trail. If the tile outside hasnâ€™t been changed â€œMaxbiltâ€ is spelled out for your reference. Mr. Silberman also build the Galli-Curci Theatre in Margaretville, named after the opera star.

At the time of my parents purchase the seating capacity was just a little over 1000. Before opening the theater, all the seats, which were original from 1929 were removed and replaced with the then current standards, and yes they were from a closed theater.

The seating capacity was reduced because of wider seats and more front to back room between the rows. The new capacity of the mid 600â€™s and also as a result of adding the middle isle to the side exits contributed to the reduced number as well. This was done because some of the seats received from the closed theater were damaged beyond repair and couldnâ€™t be used, so the isle was created and the show went on. I still have the drill and star-bit used to make the holes in the wood floor and concrete underneath where the sections were bolted down. I was the kid who was little enough to crawl towards the stage and affix the double lock washers and nuts under the sloping floor as the bolts were pushed through.

I havenâ€™t been inside the theater for many a year, but if the side lights are still there they have 3 toggle switches under each and are a semi-circle of thin glass slats. They required a bullet bulb and were original to the building. By using colored bulbs and pre-setting the toggles different lighting effects could be set up and then controlled by a master switch in the winter box-office (inside lobby on right).

Aside from the seats and locating the candy counter first the wall along side the ladies room, then to the center inside the lobby doors there were no major changes to the auditorium during my parents ownership.

At the time the 3 stores during our ownership were a drug store on the left and a barber shop on the far right. The middle store was always a transient business of some kind. Years later, when the local post office burned, the barber shop and middle store were rented to the USPS who were tenants for a number of years.

The apartment over the two stores plus the outside frames and display cases for 11X14â€™s and 1-sheets were constructed by my grandfather and uncle who were carpenters from NYC. We lived in the apartment during the summer months when the theater was open. I recall that my parents tried to keep the theater open weekends during the winter when they first purchased it, but there wasnâ€™t enough business to support the expense of heating the place. At the time they also operated the theater in Phoenicia and Woodstock.

The marquee, if it wasnâ€™t a part of the original structure, was added prior to our ownership along with what I called the â€œrunning borderâ€. This electric unit sat on top of the marquee next to the building and flashed the lights. Little emory cloth and elbow grease got it running smooth each and every year.

When my parents purchased the property, backstage was a player piano that use to be connected to hidden instruments. The backstage had dressing rooms and a rest room. When first opened the theater was vaudeville followed by a silent movie, hence the piano. The hidden instruments were reached by crawling (literally) under the stage and up and around the cooling ducts.

Regarding the proscenium arch, this was not altered by us. The only change that was made was the removal of an old screen and the installation of a new screen along with the adjustment of some drapes to accommodate CinemaScope. BTY, the walls were mostly covered with a framed fabric over an air pocket which lent to the great acoustics.

Some contributors spoke of location, size of town, etc. Iâ€™ve been to Fleischmanns within the past 12 months (2007-2008) and it was heartbreaking to see the â€œghost townâ€. It once was a vibrant summer resort with hotels, restaurants, summer camps, etc. All of these combined enabled the theater to average 70% capacity (3 shows a day) during the vacation months. Pictures, as with most of the summer theaters, opened day and date with NYC throughout the season.

One final thing, and again Good Guy In NYC is correct, but left out a bit more history. Yes, my parents replaced the projection equipment and again this was 1950. What wasnâ€™t stated, and should be mentioned is that there are or were three projection rooms. The center we used for the movies, but in the original usage the others on either side were used for spotlights for the vaudeville shows. The large open space upstairs, nicknamed by us the ballroom, was used for vaudeville practice and in later years for private parties before or after a show.

Hope this provides a bit more information for you history buffs on some occurrences during our ownership.

I just recently purchased a Cinemascope lens that has this theater’s name engraved into the metal!