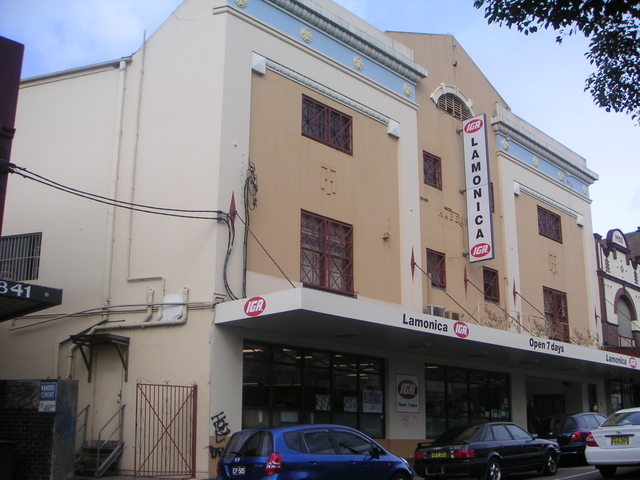 Located in Haberfield, an inner-west suburb of Sydney. The Haberfield Model Pictures was built in 1912, and served a dual use as skating rink and cinema. The single storey building was constructed in pressed metal imitation stone, with mock turrets along the top of the front facade. The auditorium was a large galvonised iron shed, with a concrete floor for the roller skating. It was taken over by John Patience in 1920 and his family purchased the building in 1924.

They demolished the old structure and built the Haberfield Theatre which opened on 24th August 1925 with Lionel Barrymore in “Enemies of Women”. The initials ‘HT’ are in the stonework on the Classical style facade. Seating in the auditorium was in stalls and circle levels.

Always independently operated, with the death of John Patience in 1940, a new owner took over and it was re-named Elite Theatre from 23rd November 1940. It was extensively re-modeled in 1941. From 1951 it was operated by G. Goldie.

The Elite Theatre was closed on Easter Saturday 28th March 1970, and was converted into a supermarket, which in 2009 is operated by IGA Lamonica.

My father was the projectionist at this theatre prior to and following the war. He was called up in 1942 by the Army and put to work, as many projectionist were at the time, into the 1st Australian Mobile Cinema Unit. He returned to the Elite after the war then took a position as Chief Projectionist at the Plaza Theatre Narrandera. I was born there and spent my childhood working in the cinema and associated milk bar with the family. Was skilled up as a projectionist by Dad. Mark Lees.