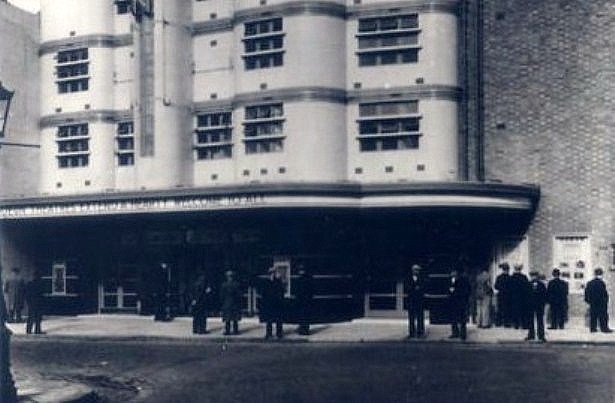 Located in the southeast London district of Deptford, on Deptford Broadway at the corner of Deptford Church Street. The Odeon Theatre was built on the site of the Palladium Cinema. It was one of the original Oscar Deutsch chain of Odeon Theatres Ltd. and opened on 3rd October 1938 with Clark Gable in "Test Pilot".

Designed by noted cinema architect George Coles, the facade was clad in cream tiles and had a tall fin tower in its centre. There were numerous small windows, and to the right of the main entrance facade was a brick extension, which housed the stairs to the balcony. Inside the auditorium, seating was provided for 1,200 in the stalls and 529 in the balcony. The side walls had stenciled patterns, rather than moulded plaster features and there were lay-lights in the ceiling, rather than a series of concealed lighting coves.

The Odeon was closed on 16th June 1944, when it suffered bomb damage, and due to wartime restrictions on building materials, it wasn’t repaired and re-opened until 17th December 1951. George Coles was again the architect for the restoration and the re-opening films were "Too Young To Kiss" starring June Allyson and "The Man With a Cloak" starring Joseph Cotten.

The Odeon was closed by the Rank Organisation on 16th May 1970 with Marti Feldman in "Every Home Should Have One" and Michael Hordern in "Futtock’s End". The building was sold to a development company Marshamheath in January 1973, but the building remained empty and increasingly derelict until it was finally demolished in May 1988. Shops and flats have now been built on the site.