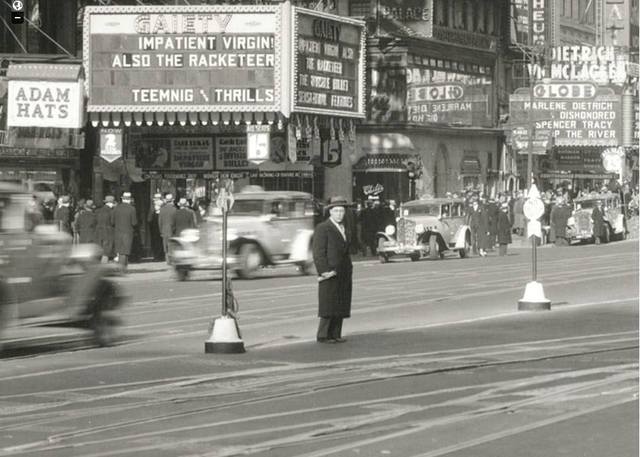 Opened on January 10, 1910 as the Globe Theatre for producer and theatre manager Charles Dillingham, this 1,475-seat theatre was designed in Neo-Renaissance style by the firm of Carrere & Hastings. It had two entrances, a narrow one at 1555 Broadway, the other at 203-217 W. 46th Street.

It originally was a venue for legitimate theatre, until closing in 1931.

It served as a movie house from 1935, operated by the Brandt Theatres chain until July 28, 1957 when “A Face in the Crowd” was its final movie.

Acquired by City Playhouses, Inc. in 1957, it was renovated and renamed the Lunt-Fontanne Theatre, after the famed husband-and-wife stage actors, returning to its pre-1935 use. At the same time, the main entrance was moved from Broadway to the former side entrance on W. 46th Street.

The theatre became part of the Nederlander Organization in 1973. Marlene Dietrich, Peggy Lee and Carol Channing have all appeared on the Lunt-Fontanne Theatre’s stage.

The theatre received an extensive restoration from 1997-99, which returned it to its original appearance, reopening with Disney’s stage version of “Beauty and the Beast”, transferred from the Palace Theatre directly across Broadway.

This link about the history of the neighboring Automat may be of interest of some.
It also had a rendering of the intersection.

The “last picture show” at the Globe Theatre was Elia Kazan’s “A Face In The Crowd,” which opened with a world premiere performance on May 28th, 1957, and ran for nine weeks, closing on July 28th, according to Variety. Images have been posted in the Photos Section.

Currently the home of the Broadway musical Charlie and the Chocolate Factory.

My wife does day work on
Charlie and the Chocolate Factory and is a wardrobe attendant on Broadway Bandstand at the Bernard Jacobs.

The first show I saw here was The Rothschilds. It was a big disappointment in that I had no idea they had stripped it of all its interior decoration. Of course bigger disappointments were to come with The Uris and The Minskoff but up until then it was the worst interior of a musical house I ever saw. I haven’t seen the restoration but I’m happy Disney did not rename the theater The Michael Eisner. Though it still could be The Bob Iger.

Added this photo back in February, but here is the proper date and photo credit. Better scanned version of it too. Globe marquee on the far left. “The Man With Nine Lives” starring Boris Karloff.

It was 75 years ago today that Frank Capra’s IT’S A WONDERFUL LIFE premiered here.