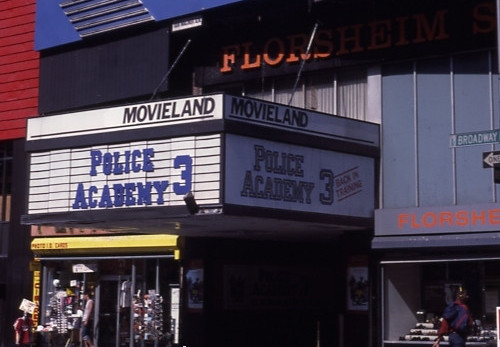 The Central Theatre was built for the Shubert Brothers and opened on September 9, 1918. It was designed by architect Herbert J. Krapp and located at the corner of Broadway and W. 47th Street, across from the Palace Theatre in Times Square. Seating just over 1,100, the Central Theatre was designed in an elegant French Renaissance style, and contained ornate plasterwork, gilded columns, and paintings on the auditorium walls depicting the court of Louis XVI.

Its auditorium was topped by an oval ceiling cove, and imported European chandeliers hung from the ceiling. It contained a balcony, boxes and orchestra pit. However, its proscenium arch wasn’t very wide, and its stage, fairly small compared to most other Broadway stages.

Briefly in 1942, the Central Theatre once again attempted a return to “all-girl revues”, but very quickly returned to second-run films. It was renamed the Gotham Theatre in 1944, and the theatre remained a movie house until it was closed in 1951 and remodeled inside. It reopened as the Holiday Theatre, and offered live stage revues, which lasted until February 1956, when legitimate theatre briefly returned for the first time since the late-1920’s.

On December 26, 1957, now known as the Odeon, it was back to showing movies under the ownership of the British owned Rank Organisation, when they premiered “Pursuit of the Graf Spee”(original British title “Battle of the River Plate”). This was followed by Laurence Olivier in “Henry V”, presented in SuperScope. In mid-1959 the Rank Organisation dropped the Odeon and under new operators it became the Forum Theatre from June 15, 1959. A decade later it became the Forum 47th Street. In October 1980 it was renamed Movieland, a name it retained until March 1989 when it was closed.

The Shubert family sold the theatre in 1989 and it was closed on March 23, 1989. The lobby was turned into the Roxy Deli, while the auditorium became a disco, called Dance USA. By the mid-1990’s, both had closed, and the building sat vacant until 1998, when the auditorium was demolished to make way for the new W Hotel Times Square.

1964 photo as the Forum added via Scott Cisco.

When it was Movieland, I played Personal Best here.

i remember when E.T. opened here June of 1982 there were lines around the block for a few weeks.

Couple 1971 pics of the Forum in below link.

David, the real cinema rarity in those pics is the Cine Lido marquee shot on the second pic. Please post this there.

is this the theater where the 1928 part-talkie version of Showboat opened?