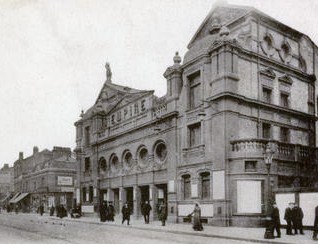 Designed by noted theatre architect Frank Matcham in a Louis XIV style, with interior decoration by Messrs Waring Ltd. Seating was provided for 248 in the fauteuils (armchairs in the front orchestra stalls), 316 in the Royal stalls, 136 in the stalls, 287 in the dress circle, 240 in the upper circle and 500 in the gallery. There were two large boxes located each side of the theatre at dress circle level. The proscenium was 32 feet wide and the stage was 40 feet deep. There were four single dressing rooms and six chorus rooms that could accomodate 40 artistes. There was also a seperate room for the orchestra. There was a resident 12-piece orchestra, and the orchestra pit was capable of holding 16 musicians.

Films were shown as part of the variety bill from the opening day, and continued until the late-1920’s. In the early-1930’s it was converted into full time cinema use, with some variety acts on stage, but this was a short lived venture, and full time variety returned, making the New Cross Empire one of the most popular of London’s suburban variety theatres. Many stars appeared here including Vic Oliver, Old Mother Riley, Teddy Brown, Issy Bonn, Max Miller, Tesse O'Shea, and even Todd Slaughter, who returned several times with his melodramas such as "Sweeny Todd, the Demon Barber of Fleet Street", "Maria Marten, the Murder in the Red Barn" and "Jack the Ripper". Stoll Moss Theatres operated the Empire until 1947, when independent operators took over.

The New Cross Empire Theatre was closed on 10th July 1954. The closed theatre then became a location film set for three British made films; Errol Flynn and Anna Neagle in "King’s Rhapsody", when the auditorium ‘stood-in’ for an opera theatre, with an opera produced on-stage, which was filmed in Eastmancolour in 1955. Views of the auditorium, mainly the boxes can be seen in this one. In the Max Bygraves film "Charlie Moon" which was filmed in 1956, there are many scenes filmed in the auditorium, on-stage and brief exterior shots. “High Terrace” starring Dale Robertson.

The New Cross Empire Theatre was demolished in July 1958, and a petrol filling station was opened on the site. In 2009, the open space is used as Deptford Hand Car Wash.

Historic photographs and more details of the New Cross Empire Theatre here:
http://www.arthurlloyd.co.uk/NewCross.htm#empire
A vintage postcard view from around 1905:
http://www.flickr.com/photos/matt1965/3567820174/

There was another film shot at the New Cross Empire, it was ‘High Terrace’ starring Dale Robertson and Lois Maxwell (the original Miss Moneypenny). It was filmed around 1955/1956. I watched some of the filming, a night scene at the stage door entrance at the rear of the Empire. Dale Robertson was quite well known at the time, it was a bit of a surprise to see him walking along New Cross Road with a limp and using a cane for a support. I discovered long afterwards that he had been seriously injured in North Africa during the war serving in the US Army.