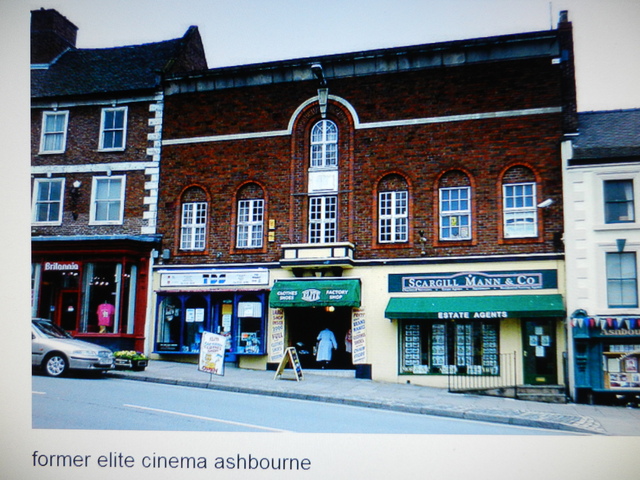 The Elite Cinema opened by 1929 in the small market town of Ashbourne in Derbyshire, it was run by local proprietor Frank S. Bromwich who also designed the cinema and ran the towns' other cinema, the Empire Cinema.

The Elite Cinema is located in the main square-Market Place of the town and was much more upmarket than the Empire Cinema.

Internally there was a small lobby with a tiny box office window and doors into the stalls, and a staircase with metal handrails led up to the balcony. The auditorium had a simple barrel ceiling and there was an arched proscenium with ornate mouldings and small stage. There was little other decoration apart from Art Deco style glass wall lights. It was equipped with a British Acoustic(BA) sound system.

The Elite Cinema closed in 1976 and after a few years of lying empty was converted into a mini shopping arcade in the stalls area (no sign of the auditorium remained) and a nightclub in the balcony with a dance-floor inserted across from the bottom of the balcony cutting the auditorium in two horizontally. The upper proscenium arch remained and some ceiling decoration.

The nightclub was still use in 2009, but had closed by 2020. Plans were approved in July 2020 to reopen the former balcony area as a 144-seat cinema & community centre. Work began on the conversion in February 2022, with a planned opening summer 2022.

photo from 2006, looking much the same apart from the loss of the torch lights
View link