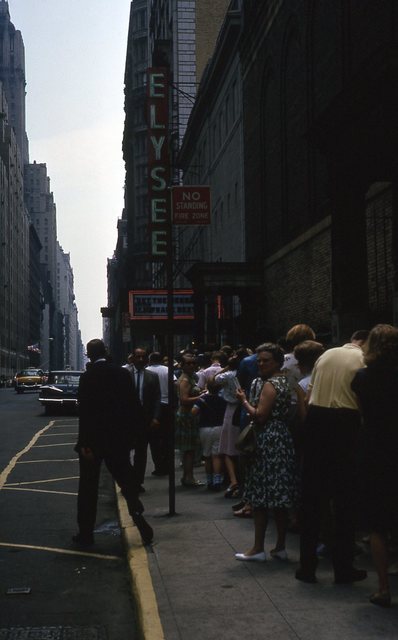 Actor-turned-playwright John Golden was a former architecture student and designed the layout for his self-named theatre himself in 1926, although the main designs were by architect Harrison G. Wiseman. Built across the street from Jolson’s Theatre, on W. 58th Street, the Golden Theatre’s facade was almost severely plain-looking but inside, it was something out of Old Spain.

The 885-seat theatre included a balcony, a very narrow, unadorned lobby, a full orchestra, and a square-shaped proscenium. The general color theme of the auditorium was originally olive and gold, and contained wrought-iron chandeliers and the house curtain was decorated with an illustration of a Spanish galleon.

After nearly a decade of legitimate theatre, Golden was forced to sell off his theatre due to the Depression, and in 1935, it was taken over by John Cort, who renamed it Cort’s 58th Street Theatre, and featured mostly stage comedies.

However, within a year, Cort gave up the theatre, and it began to screen foreign movies, under the name of the Filmarte Theatre, and shortly thereafter, as the Fine Arts Theatre.

In 1942, it was renamed yet again, as the Concert Theatre, and presented its first live act in seven years, a comedy called “Of V We Sing”, which played very briefly. A year later, the theatre became a house of worship, as the Rock Church, and seating was increased to over 1,000.

However, by 1946, the church was gone, and it was named Cort’s 58th Street Theatre once again. However, rather than a return to legitimate theatre, as was planned, it was instead leased by the ABC network as a radio studio for a number of years, before again returning to foreign feature films in the late-1940’s, this time under the name the Elysee Theatre.

In 1955, ABC returned and used it as a television studio until it closed in 1985. It was demolished a few months later.

The first run of “Carnival In Flanders” was also the opening film when it became a cinema in 1936.

I believe a small part of the Elysee Theater is still standing and integrated into the Choir School. It appears to be the “narrow, unadorned lobby” referred to in the main description, since it looks very old with a possibly Moorish design of the original building. As I recall, the lobby was on the right hand side of the theater. I attended a taping of “The Dick Cavett Show” here in about 1970, when I was a college student. 15 years later, I had the good fortune to work as a writer for Mr. Cavett on his short-lived USA Network series in 1985.
– Richard Wilson

Regarding Mr. Wilson’s post: my recollection of the Elysee’s site was one of complete demolition. I worked for ABC-TV at the time and curiously passed by one afternoon to ‘say good-bye’ to what was our stalwart Studio TV-15. There was nothing left. I would love to believe there is extant Elysee architecture still occupying 202 W 58 St., but I think it unlikely. Oh! How I would love to be proved wrong! I also attended Mr. Cavett’s show there and later on made many visits during “The $20,000 Pyramid” era. How lucky you were to have worked with Mr. Cavett!! A brilliant writer.

I was the manager of the Elysee Theatre for about a year in 1952. A major show then was “Stop the Music,” and they had some very fine guest singers. I’ll never forget sitting in my office and hearing an angel’s voice from outside and below. I rushed out to hear Sarah Vaughan singing “Tenderly.” But my most memorable moment was a benefit for Adlai Stevenson, especially after the show when Tallulah Bankhead rushed into his body declaring, “Darling, I’ve been working my bones off for you.” I’ve never seen a more startled gentleman. (Eisenhower also did a tape there.)

Why was this theater re-named, for the second time from “Cort’s 58th Street Theatre” to “The Elysee Theatre” in the late 1940s? Does anyone know this?

Did the theater owner)s) of that time have some affinity for the Elysee Palace in France and/or did the architecture of the building in any way resemble the French palace? Or did the owner(s) just think that a good name for a venue showing foreign films?

I’m sorry, but I must beg to differ about the information here regarding the John Golden/Cort Theater. I had an office job at 220 West 58th Street in 1973-74 (that building was recently demolished) and next to it was “The Dick Cavett Theater,” which had previously been the Golden/Cort. I walked that block this past summer, and I could see the remains of the Golden/Cort, though there’s no marquee, and the entrance doors have been surfaced over. (I saw Lucille Ball, as Cavett’s only guest, in this theater, when she was publicizing her movie, “Mame”.)

I just checked Google Maps, and the John Golden/Cort/Elysee/Dick Cavett Theater is still standing, exactly where I described it in my previous post. It is the building on the far right in the picture at the top of this page, and if you look at the Google Maps image of August, 2014, the theater is the building covered with scaffolding.

Alas, Mr. Miller, your recollection of what you believe to be the Elysee/ABC Studio TV-15 is mistaken. The structure you cite in your above posts is not, nor was it ever at any time, a part of the Elysee. It’s an adjoining building. Please trust me on this. I’m a former ABC-TV employee…I assure you there isn’t a single remnant of that theatre still standing on 58th St. I saw the deep hole where it had once stood. I have in my possession 14 blueprints of the Elysee from various periods during ABC’s ownership. These include structural changes, dressing room makeovers, seating configurations and so on. The Elysee stood on what is Block 1029/Lot 37. That lot measures 75-feet wide by 100-feet 5-inches deep. It (and the theatre, of course) is a simple rectangle. As you know—having seen Lucy there (what luck!) the theatre’s orientation was north to south (i.e.; the front entrance on 58th St—the back wall of the stage oriented south of 58th). The building to its west (the one you point out) isn’t a part of the lot; the theatre’s west wall adjoined it. Mr. Miller, as I indicated above in Sept 2010, I so wish it were true that the Elysee—or even a piece of—still stood. It doesn’t and hasn’t since 1985. The St. Thomas Choir School now sits on “Block 1029/Lot 37”.

I went to the Elysee/ABC Studio TV-15 sometime around 1955 to see a game show called “Dollar a Second.” The host was Jan Murray, the former Catskills comedian. My parents were friends with the head of the small ad agency that had the account of the show’s sponsor, Mogen David Wine. The show was done live (there was no tape in 1955) on Fridays at 9 PM. I sat in the sponsor’s booth which was in the rear of the theatre on the left side. It was very plush, like another world compared to the audience seating just outside the booth.

My parent’s friend had promised me I could see the control room, so about halfway through the show, he led me to the control room at the back of the theatre. It was extremely exciting. At one point, I saw on the monitor that the mic boom was visible in the shot. I tried to bring this to the attention of the director calling the camera shots who was right next to me. He never recognized my existence.

An interesting thing is that after “Dollar a Second” was over, a second show was aired there, but it was on NBC! It was some kind of variety show that was supposed to follow the Friday night Gillette (boxing) Fight of the Week. Its starting time depended on how many rounds the match lasted. The night I was there, there was not enough time for Jan Murray’s NBC show, because the fight ran too long. I heard them discussing what to do. They decided to do the show on Kinescope. I don’t know when or if the show ever played on TV.

After both shows were over, I and my school friend were led by the ad man out of the theatre to the stage door that was at the end of a long North-South alley just West of the theatre. Then up some stairs, we arrived at Jan Murray’s small, plain dressing room. Murray was exhausted and not interested in talking to us. He just said, “Okay boys, I’ll give you my autograph.”

I also met and got the autograph of the announcer, Ken Roberts.

My other memory of the theatre was when Dick Cavett was doing his show there. It was just before Christmas, and I happened to be walking by while he was taping a show some time after dark. Cavett’s limo was parked outside and was loaded with Christmas presents. His driver was chatting with some people about how Cavett was going to be going out to Montauk after the show and how long the drive would be etc. and how late it would be by the time they got to the end of Long Island. I remember thinking Dick Cavett has a darn good life.