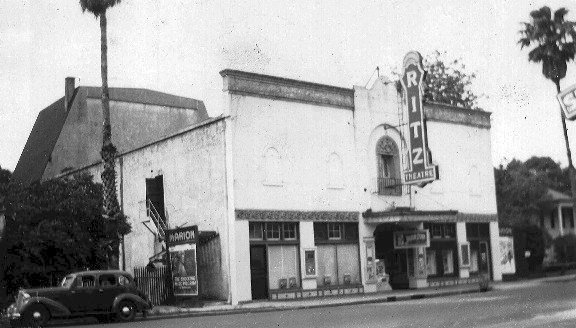 The Etta Theater dates back to at least 1928 when a Wurlitzer organ opus 1505 was installed. The name was changed to the Ritz Theater in the early-1930’s. In the early 1940’s it was operated by Paramount Pictures Inc. through their subsidiary E.J. Sparks. The Ritz Theater is still listed in the 1955 Film Daily Yearbook.

In 1957, it was renamed Florida Theater and operated into at least the mid-1970’s

The September 28, 1957, issue of Boxoffice said that the Ritz Theatre was being remodeled and and was to be renamed the Florida Theatre. Due to a street widening project, the front ten feet of the building would have to be removed and a new facade built.

The May 21, 1962, Boxoffice says that the Florida Theatre in Ocala had been sold by B.S. Maas Co. to an operating company headed by Lloyd M. Gerber.

A mention of the Florida Theatre in Ocala appeared in the July 22, 1968, issue of Boxoffice. It was then being operated by MCM Theatres of Leesburg.

The most recent mention of the Florida I’ve found in Boxoffice is in the February 3, 1975, issue, when the manager resigned. It looks like this house operated under the name Florida for almost twenty years at least.

From Google satellite and street views it looks like this theater has been demolished. There is no building on that block with anything that looks like an auditorium or former auditorium. Historic Aerials has nothing before 2007 for the location.

It played Alot of Double features such as “HEAVEN WITHOUT A GUN” and Elvis in “DOUBLE TROUBLE” on the same bill.

I worked at the Florida Theatre in Ocala during my high school years (1960-1963). It was a fun place to work for a high school kid! Not as “Up-scale” as the Marion Theatre, but I had as much fun as a kid could have @ 50 cents an hour, and all the popcorn you could eat! We showed mostly 2nd run movies. I was an usher, sold tickets, sold candy and popcorn, and sometime filled in as relief projectionist. I also changed the marque. That was really fun when it was cold and rainy!!! I think I got paid extra for that, but don’t remember for sure. After Silver Springs Boulevard was widened, the sidewalk in front of the theatre had a significant slope to it. This made changing the marque really fun as it was almost impossible to get all four feet of the required 20 foot ladder securely on the ground at the same time! Especially on the right side marque where the sidewalk sloped in 2 different directions.

I wish I had known more of the history of the building when I worked there. I understand it had once been a vaudville theatre stop. The area behind the screen and in the basement was really interesting with multiple dressing rooms and storage areas. All the old movie “1 sheets” (Posters), that were there would probably be worth a fortune on ebay now, but who knew then?

In keeping with the attitudes of the time, African Americans were required to sit in the balcony and had a separate entrance. Black Americans were not allowed in the Marion Theatre at that time!

The building has been demolished and I believe the area was a parking lot the last time I was in Ocala.

One of the most exciting days back then was in July 1961, when Elvis came to town while filming “Follow That Dream!”

The Ritz was Ocala’s first interacial theater. In the 70’s it specialized in low budget exploitation movies and was the closest thing Ocala, Florida ever had to a grindhouse. It closed for business in April of 1977. The last film that played there was ABAR: The Black Superman. For more information on Ocala movie theaters, check out http://www.popretrorama.com/ocala-movie-theater-memories-the-1970s/