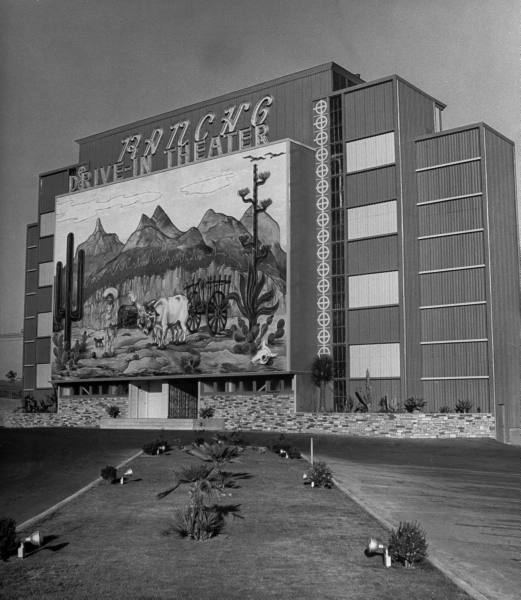 Once patrons found just the right dock to park their automobile they could trigger a switch on the speaker post to call a car hop to come and take concession snack orders. Glider swings stood available in front of the oversized silver screen for those who chose not to remain inside a cramped car.

Everything was up to date at the Rancho Drive-In, and ticket sales were brisk. Problem was, it didn’t take too many years before real estate which the theatre occupied to become more valuable than an outdoor theatre could support. The end came rather quietly, no fanfare on October 17, 1978.

This opened on January 28th, 1948. Grand opening ad in the photo section.

Approx. address for this drive-in was 1515 Euclid Avenue. The entrance is now McDonald’s!

This IS the Rancho Drive In of San Diego! It was located on the Southeast corner of Euclid Ave. & Federal Blvd. The entrance driveway to Mc.Donalds is the approximate entrance. It headed straight to the back of the screen building on which was the desert mural. The driveway turned a sharp right downhill to the box office.

To the left of the driveway entrance slightly uphill to Federal was a sunken Frostie Stand building upon which a Marque (three sided) stood. You had to lean over to give the girl your order. A Cheveron gas station was built on this spot. It is now a New Orleans type fish drive thru.

The theater property extended all the way from Federal Blvd. south to were Hiwy 94 is know. The eastern boundary was approximately at the Dion truck sales & repair is now.

Tuffluck7, I’m not quite as old as you, but you are so RIGHT! My family moved to San Diego in 1959; to Emerald Hills to be be exact; which is right across the freeway and up the hill from where the drive in was. As a matter of fact, you could stand at the top of Kelton Road, or in the parking lot of “the church on the hill” or Johnson Elementary school, and see the movies that were playing! At that time, that portion of Emerald Hills had not been developed with housing (facing west to northwest); I think this was the reason. No houses went up on that portion of the neighborhood until well after the drive in had closed.

I have MANY found memories of attending movies at the Rancho in our 1965, 9 passenger, Pontiac Safari station wagon (which was purchased from John Hine Pontiac) with my other 5 siblings. My father was a chaplain in the Navy and was overseas alot, so sometimes he would be with us, but most of the time my mother would take us. To this day I still remember once when he was in town and took just the boys to see the 1966 release of Beau Geste starring Telly Savalas; his famous line, “Always expect, the unexpected!”

I don’t recall when it closed but it was vacant and abandoned for about five years before it was finally torn down. First a GMC truck dealership went up at the base off of Federal and then Cox Cable came in, took over and built on the rest of the property. Another lost gem to “progress”.

I saw “The Greatest Show on Earth” there 26 times, each time with a different girl. And it was all free! Are you still in Emerald Hills?

hello Gmcphatter!! I lived in Emerald Hills also.. on Geneva.. my dad was in the Navy too!!! We could see the Rancho Drive in films real good from our back door steps and the kitchen window… we could watch the movies while were doing the dishes. Yes the Cox Cable facility is the site of the Rancho Drive in… The entrance was roughly a few steps from the north side of tha McDonalds… I live in LA now but when I am in SD that’s still my hood…

@Tuffluck7 – was finally able to log back in here and comment. I don’t live in Emerald Hills anymore, I live in L.A., but we still have our family home there; I go down about once a month.

@hannibaltharadio – I had friends that lived on Geneva, guess you don’t know me though; you’d recognize the last name. Like you, I left “small town” San Diego and headed north to the “big city”, L.A. and yes, Emerald Hills is still my hood also!

1948 Getty image of the Rancho Drive-In.