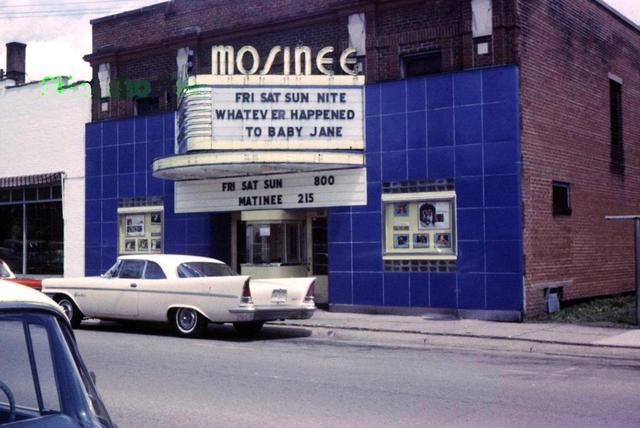 Opened in 1923, vintage photos indicate that the Mosinee Theatre was later styled in Art Moderne design. Seems that on May 1, 1950 this movie house was embroiled in some sort of political controversy when local citizens organised a Communist takeover of the town organised by the American Legion.

A 1977 book titled Woodlot and Ballot Box: Marathon County in the Twentieth Century, by Howard R. Klueter and James J. Lorence, says: “Mosinee’s only theater was built in 1923….” The Art Moderne style must have been the result of a later remodeling.

This was probably the house that was in the planning stage in 1922, according to an item in the March 25 issue of The American Contractor that year:

The closest thing to a political controversy involving the Mosinee Theatre that I can find reference to on the Internet is a fake “Communist takeover” of the town that was staged by the American Legion in 1950. The stunt attracted enough national attention in those days when Wisconsin’s red-baiting Senator Joseph McCarthy was riding high that Life Magazine ran this article about the event in its May 15, 1950, issue. The article includes a photo of the Mosinee Theatre.