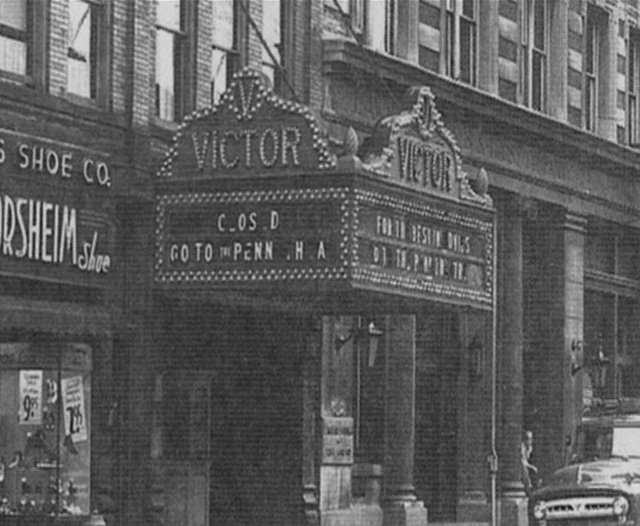 The Nixon Theatre was opened in September 1911. In 1930 David Victor bought the Ritz Theatre and named it after himself. In May 1948, he sold the house to Gamble Enterprises, operators of the Penn Theater on N. Mercer Street in New Castle.

Like the nearby Dome Theatre (Paramount/Vogue/New Vogue/Cinema) the Nixon (Ritz/Victor) originally had no restrooms since programs only lasted a half hour or so. These early nickelodeons had a quick turnover in audiences. Feature films were still a bit in the future. Films grew longer, audiences more discriminating, prices rose to 15 cents or higher (!), and city officials demanded â€œcomfort facilities.â€ Some places closed like the Cascade, Moravia, Star and Baltimore Strand. The Nixon and Dome found only one location in their smallish buildings to place restrooms, behind the screen! So, while the audience watched what was ON the screen, men walked up the left aisle and women up the right, under illuminated signs that read EXIT/MENS and EXIT/LADIES, to attend to nature. Of course, there was the occasional catcall by less sophisticated patrons. The Victor never had a concession stand until the late 50â€™s and a rather unusual shaped auditorium. The room had a fairly large screen, for its size, with flanking exits (and restroom entrances). Seating was in two sections; however, one seating section had 10 to 12 more rows of seats than the other, thus giving the auditorium a squared off â€œpork chopâ€ appearance. Certainly unique, especially for a first run house.

The Dome in its various incarnations never amounted to more than a second run B house. The Nixon on the other hand was the number two first run house (specializing in WB and Fox) throughout the thirties, forties and very early fifties. In 1951, after a very brief try as an art house, the Victor closed for 7 years. It reopened in the late fifties, finally with a concession stand, as a second run double and triple feature grinder operated by the Fry family, operators of the Wampum Theatre in nearby Wampum, PA.. John Borovilos operated the Victor for a couple of years before it was finally closed and demolished in the early sixties. The Victor boasted a beautiful, three sided marquee with hundreds of tiny bulbs, a beautiful, nighttime feature on New Castleâ€™s main shopping street. Since itâ€™s closing, the location has remained a vacant lot.

David Victor also tried to run movies, briefly, in the mammoth, very ornate Cathedral auditorium within the imposing Masonic Scottish Rite building. He also operated a theatre in Meadville, PA during the early depression and the Victor Theatre in McKeesport, PA..

The building housing the Victor Theater and a shoe store was purchased by Lawrence Savings and Trust in mid-July 1962 to be razed for an expansion to the bank, parking lot and drive-thru window. The theater appears to have closed the weekend on July 14-15, 1962 with the final booking of “Hunchback of Notre Dame”, “The Big Circus”, and “The Plunderers”.

A Nixon Theatre in New Castle was listed in the 1906-1907 edition of Julius Cahn’s guide as a first-floor house with 1,800 seats. This house was part of the Nixon & Zimmerman chain, which operated first-class theaters for touring companies in Pennsylvania, West Virginia, and Ohio.

I don’t find the Nixon listed in later Cahn guides, though. Instead, there is a theater listed as the Opera House, with fewer than 1,100 seats. A New Castle theater called the New Opera House is on a list of Cahn-affiliated houses published in the December 5, 1908, issue of em>The Billboard.

But the Nixon was still in existence in 1913. This web page, which is mostly about a murder that was committed in New Castle 1905, mentions a meeting of spiritualists that took place at the Nixon Theatre on February 2, 1913.

The 800-seat capacity Nixon Theatre began construction on May 24, 1911, and began its operation sometime around July and August of 1911 (although it had been operating that September). The nearby Pastime Theatre, in connection of the opening to the Nixon, closed its doors for the final time after a “possibly almost” 10-year run.

50sSNIPES - Since the very first nickelodeon didn’t open until 1905, the “possibly almost 10 year run” isn’t possible. It was operating as early as September 1909. When the Nixon was being built, it enveloped the Pastime into its design transforming it into part of its lobby and entrance, and in part into a new auditorium.

I see, but I think the information you brought in was actually the Nixon Theatre in the neighboring town of Pittsburg which opened in early 1906 (with their new theatre announcement dating to January 25, 1906 estimating $100,000), operated by Nixon Hanauer of Pittsburg.

Yes I gave a little bum on the Pastime too, it was short-lived, but at least you got very good evidence on your correction, thank you so much for correcting me!

I’m a little confused, 50sSNIPES, re your comment “information I brought in”? If you are referring to my comment re first nickelodeon, the first was called the Nickelodeon and was opened by Harry Davis and his brother-in-law John P. Harris in June 1905 in Pittsburgh. (That was the theater that inspired the Warner Brothers to start their own business.) If that isn’t what you were referring to, please explain.

I was referencing about the Nixon Theatre, not the first Nickelodeon in Pittsburgh. I know what you mean’t but I wasn’t talking about the Nick or 50+ miles south of New Castle. While checking the New Castle Herald papers, information from the 1906 to 1910 status reads that the Nixon was located in its neighboring town (and no I’m not talking about Pittsburgh. There used to be a town near New Castle called “Pittsburg” which I believed that the name of the town was dead since I cannot find it anywhere at all, but (not to be confused) there is a small census area called “West Pittsburg” south of Willow Grove and New Castle, population 671 as of 2019).

If you look at Page 1 of the New Castle Herald (dated May 24, 1911), it demonstrates the erection and construction of the “new listed” 800-seat “New Castle” Nixon Theatre being built right in the rear of the Pastime. So as on my best resources, I found that this could be a “relocated” Nixon. I’m gonna be uploading a picture of the article as well in a jiffy.

I appreciate the confusion. The Pittsburg you refer to, is in fact Pittsburgh, PA. In 1891 the US Board of Geographic Names dropped the “h”. From 1891 to 1911 the name was Pittsburg. Some publications refused to drop the letter and it was referred to by both names in print. Back in those days, New Castle had numerous daily trains from and to Pittsburg(h), making it easy to get to that Nixon theatre. New Castle’s first Nixon was the one that was built around the Pastime and was officially opened as you pointed out in September 1911. There was a reference in the 1906-1907 Julius Cahn’s guide as noted above to an 1,800 seat Nixon in New Castle. The story behind that is that Nixon and Zimmerman were trying to convince the owner of the Opera House in New Castle to lease his theater to them. When the owner wouldn’t lease it, they got mad and announced the next day they were building this Nixon in New Castle. They tried for two years to obtain a site. They then approached the owner of the Coliseum in New Castle but were unsuccessful with those negotiations as well. Their Nixon was never built. Marty Gibbon opened the New Castle Nixon and I was never able to make a connection between him and the Nixon and Zimmerman syndicate. Gibbons also owned the Lunetta and Grand Theaters in Beaver Falls.

Wow! I did not notice that until now! You are pretty much smarter than the earlier pages of the New Castle Herald. Thanks for sharing that with me!