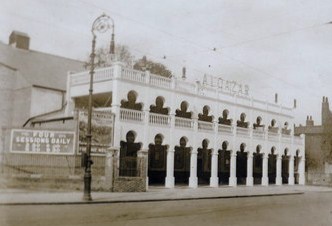 Located in the north London district of Edmonton, on the west side of Fore Street, almost opposite Fairfield Road, just a few yards north of Angel Road (today its the North Circular A406 road-Sterling Way). The Alcazar Cinematograph Theatre opened on 28th June 1913 with "The Battle of Waterloo". It was part of an entertainment complex which included an enclosed Winter Gardens, which had a palm court and provision for dancing, and an outdoor Summer Gardens as well as a roller skating rink and a tea room.

Demand for seats at the opening was so great, that the 1,700 seat Alcazar Cinematograph Theatre was filled to capacity and seating had to be placed in the Winter Gardens to take the overflow. It became a regular occurance to screen popular films in both spaces, and in summer months, the Summer Gardens were also used as a cinema.

The building was designed like a Moorish palace, with a covered verandah stretching 140 feet along the facade at first floor level. The auditorium ran parallel to Fore Street, with the main entrance at the northern end, and an entrance at the southern end for the cheap seats beside the screen. Inside the auditorium seating was provided in stalls and circle levels. There was a a particularly attractive decorative ceiling.

The Alcazar Picture Theatre was re-built in 1933 and was the last cinema in the area to be fitted with sound equipment. The proscenium was 32 feet wide and the stage was only 8 feet deep. There were three dressing rooms. It suffered badly when the new 2,940 seat Regal Cinema opened in March 1934 just a few yards away on Angel Corner.

The Alcazar Picture Theatre was closed when it was hit by German bombs in the early hours of the morning of 23rd August 1940, which destroyed the dance hall and one wall of the cinema, causing the roof of the auditorium to cave in. Further damage was done by a V1 flying rocket which landed nearby in October 1944.

The remains were demolished and the site stood derelict until the 1960’s, when the local council built a small parade of shops with flats above, and houses at the rear on the site of the Summer Garden. In 2009, a British Red Cross Charity Shop is located where the entrance to the Alcazar Picture Theatre once was.