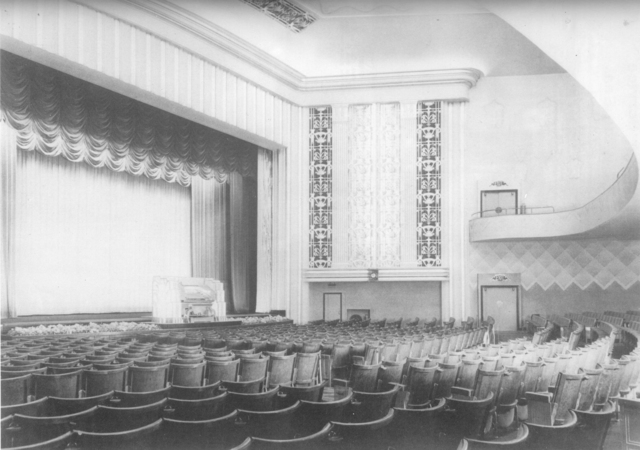 Built by the Union Cinemas chain, they were taken over by Associated British Cinemas(ABC) just prior to its opening on 19th March 1938, with Greta Garbo in "Marie Waleswska". Known as the Ritz Cinema, it had seating for 1,212 in the stalls and 694 in the circle. The cinema was equipped with a Wurlitzer 3Manual/8Ranks organ that was opened by Wilfred Southworth. There was also a restaurant located in the circle foyer.

It was re-named ABC on 5th April 1962. The Wurlitzer organ was removed in 1964, and the cinema received a ‘modernisation. There were some live shows in the 1960’s when pop stars such as Cliff Richard, The Shadows, Billy Fury and Mark Wynter appeared on the stage.

The ABC was closed on 6th October 1971 with Steve McQueen in "Le Mans". The building had been sold to Sainbury’s to build a new supermarket on the site. The ABC was demolished in December 1971 and archaeologists discovered the foundations of a medieval Augustine Priory on the site.

In 2009, the new building on the site is occupied by ESK Wholesale Ltd.

Vintage photographs of the Ritz Cinema, and its Wurlitzer organ console:
http://www.ukwurlitzer.co.cc/2211.html

Unfortunately the above link (Vintage photos…) no longer works.

However am thoroughly enjoying the book! :)

That was such a beautiful cinema, just one of so many lost in Hastings to ghastly development! great website, thanks.

My father Barrie Brettoner was the resident organist here circa 1937/8 to the end of 1939; when he mum & my two older brothers returned to Sydney NSW Australia, thus escaping the worst of WWII.