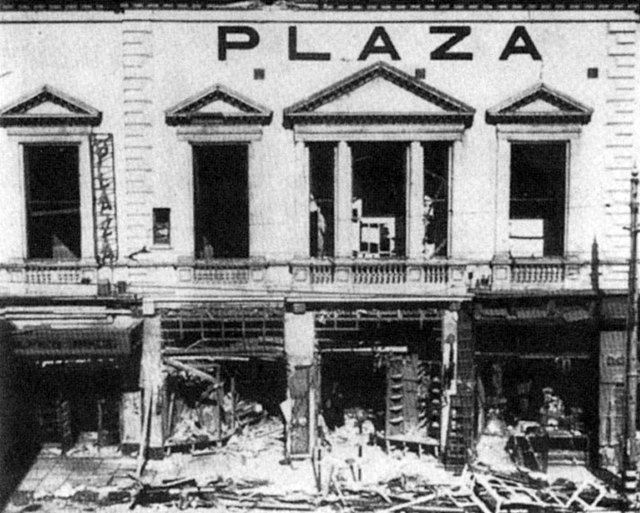 The Public Hall Assembly Rooms were built in 1875. Occasional film shows were given at the turn of the century. It was converted into the Public Hall Cinema on 24th July 1913.

New owners took over in 1930 and it was re-named Plaza ‘All Talkie’ Theatre, and it was refurbished in March 1937. On 30th September 1940, the front of the building was hit by a German bomb, killing 14 people, including the manager of the Plaza Cinema who was chatting outside. Twelve others were seriously injured.

Repairs were carried out and in 1948 it was taken over by Cranfield Cinema Co. and re-named Orion Cinema, as they had other Orion Cinemas operating in Midhurst, Burgess Hill and Hassock.

Bill Grant Theatres took over in 1962 and by 1970, plans were proposed for the building to become a sex cinema, although the Mormons were also interested in converting the building in a meeting house. However films continued, although they were of an adult nature with many horror and soft core sex films being played.

With new owners in 1978, the policy changed to family and first run films. Also in 1978, W.H. Smith, who operated a shop on the ground floor, puchased the freehold on the building.

The Orion Cinema was closed on 31st August 1978 with Harrison Ford in "Star Wars". This was despite the cinema still making a profit. It was converted into a larger store for W.H. Smith in 1979. The building now houses a Yates’s Wine Bar.

I went there and saw Star Wars yet again just so that I went on the last day of the Orion.