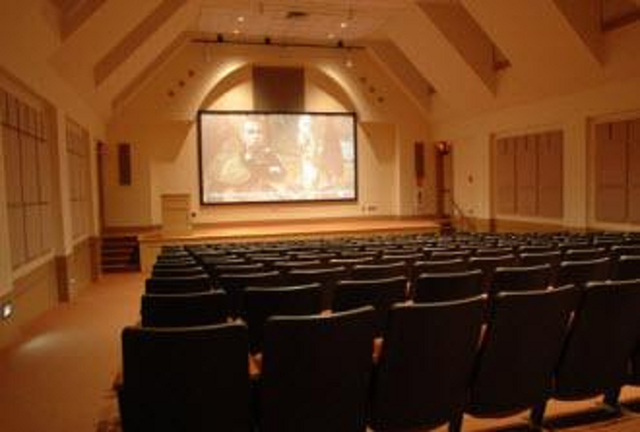 The Plimoth Cinema is located within the Plimoth Plantation museum complex. It’s a twin-screen theater which specializes in Independent and Foreign films. It opened September 15, 2007.

Until last Friday I had never seen a movie display ad for the Plimoth Cinema in the Patriot Ledger entertainment section. They ran a very nice ad for the Woody Allen movie “You Will Meet a Tall Dark Stranger”; the ad was shared with Loring Hall in Hingham.

It seems that there are 2 theaters in this complex. The larger seats 225 and is the one most often used for the movie shows. The smaller seats 125 and is sometimes used for the movies. Total, 350 seats. They are not both used simultaneously for movies, as in a twin cinema. They are both capable of showing the orientation movie which is presented several times daily when the complex is open to visitors.

The Plimoth Cinema opened at 5AM last Friday morning for a live TV feed on its big screen of the Royal Wedding in London. I think that breakfast refreshments were also available. From coverage on local TV news it appeared that they had a good house there.

chuck1231 – It’s lonely out here! I wish that more people would find the CT website so we would see more comments here, and for other theaters, too.

Ridgewoodken- See the posting above of April 21,2011. The larger auditorium, the Linn Theatre – the one mostly often used for movies, seats 225.
I am surprised to hear that your comments have been disappearing from the site. Several years back, they had a problem wherein all comments on a theater’s Page would suddenly disappear. That happened a number of times, reasons unknown. But I haven’t seen that happen in awhile now. It most often happened on Pages that only had a few comments.

I did not know there was a theatre operating in Plymouth and I am less than 20 miles away in Scituate. We have our own twin cinema here and also the Hanover, Kingston & Hingham cinemas. The only problem with these cinemas is that you very rarely see any Indy or Foreign films there except at the Loring Hall in Hingham. It would be nice if you would put an add or column in The Mariner or Ledger newspapers so we would know what was playing. Not everyone has a computer.

There was a brief item in the Quincy MA Patriot-Ledger yesterday that a program is underway to raise funds for the purchase of a digital projector for the Plimouth Cinema.

They are well on the way to funding for digital, thanks to some benefit parties. They hope to install by the end of this year. They also hope to start showing 2 films simultaneously, using both auditoriums at once, something they now do not do. This info has been gleaned from Patriot-Ledger articles about their recent fund raiser.

The Boston Herald of Jan. 14, 2016 had a lengthy feature with color photos of 4 cool places in eastern-MA to see movies. One of the four was the Plimouth Cinema which they point out is open year-round. The others were the Orpheum in Chatham, which has a special film package going on now; the Brattle in Cambridge, and the Coolidge Corner in Brookline.