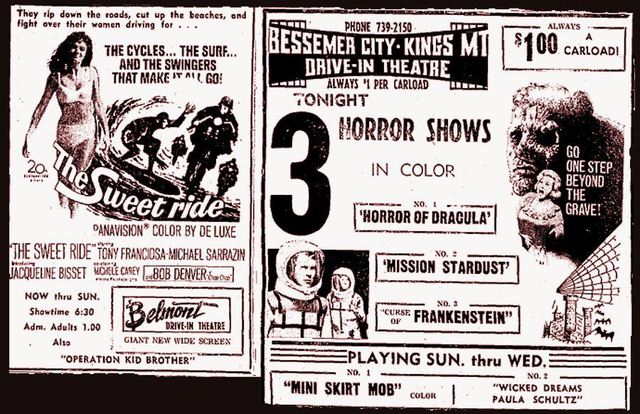 The Bessemer City Kings Mountain Drive-In opened around 1949. This drive-in showed movies on Friday, Saturday & Sunday. Car capacity is approximately 600. It was closed August 30, 2014 unable to afford the changeover to digital projection.

I sent Nick pictures,Hope he gets them on.

Nick,Did I take that letter or put it back?LOL. Thanks.

Mike, But of course you put it back…I think!

Are you Double dog sure? You know me and Movie Theatres.

You added the color picture from your files,looks much better than my B/W pic. Thanks Nick.

From Fox 46 News: For 65 years, families have enjoyed the Bessemer City Kings Mountain Drive-In Theate At $10 a carload, the drive-in has welcomed thousands. This weekend, the drive-in will roll films for the final time. It’s closing because Hollywood isn’t producing the film the theater uses anymore. Friday, August 29- Sunday, August 30, the drive-in will show three films back-to-back-to-back. The first feature film is Teenage Mutant Ninja Turtles, followed by Dawn of the Planet of the Apes and then 22 Jump Street. Header should read closed.

I was driving by on the way back from Atlanta and decided to swing by this drive-in. There’s a no trespassing sign, so we just pulled into the main entrance and didn’t go on the actual grounds. I inquired with the owner several months ago about buying it, but they already had sold to his brother and didn’t know what the plans were. It’s still defunct and doesn’t look like anything is happening anytime soon. The screen is starting to get holes in it — sad…