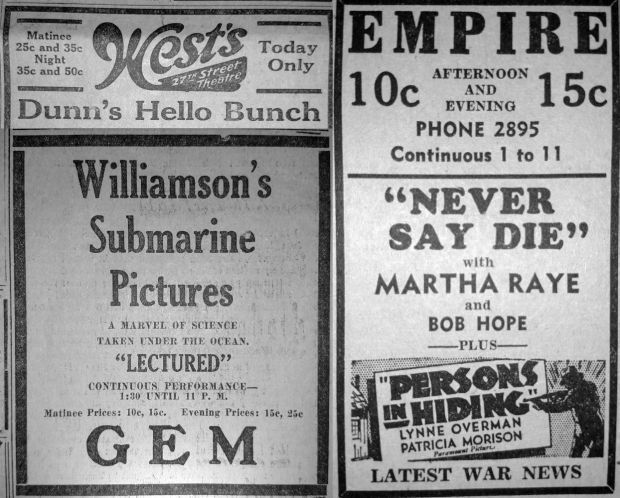 The Gem Theatre was opened February 22, 1913. On July 15, 1916 it was renamed American Theatre. On February 1, 1920 it was renamed West’s 27th St Theatre which closed in 1929. It was reopened by Fox Intermountain Theatres as the Empire Theatre on December 23, 1938, with Charles Starrett in “The Old Wyoming Trail”. Despite its B movie status, it was billed as a first Montana showing and the newspapers advertisements touted ‘All Loge Seats’. The Billings Gazette said the building, which previously housed West’s Theatre, was remodeled at a cost of $15,000. Other tenants of the building since 1911 included the Kennedy hotel and the Gem Theatre. It was noted that R.B. Roberts, the interior muralist, had spent 15 years painting murals on the walls of Windsor Castle in England. Other open theatres in town at the time included the Babcock, Fox, Lyric and Rio.

On March 10, 1950, the theatre and the neighboring Range hotel were reduced by fire to shells and never rebuilt. The Billings Gazette said that Barbara Denison, a 16-year-old usherette, was credited with preventing panic in the fire. She went to the front of the theatre and calmly pleaded to the crowd to take their time and not run.

As early as 1953 plans were announced to construct a new building on the site but by 1954 the building still had not been demolished. The Gazette reported on January 9 that two runaway brothers had been caught living in its charred remains. Today a modern office building occupies the site in downtown Billings.

The Gem Theatre began showing movies in 1916, according to this item in the August 12 issue of The Moving Picture World:

“Billings, Mont.—Arthur Mann, proprietor of the Gem theater here, has succumbed to the lure of pictures. He shortly will reopen his playhouse with a regular offering for film fans.

Mann had only recently acquired the house, as noted in the September 16 issue of the same publication. The item also says that he had changed the name of the house to the American Theatre:

"BILLINGS, MONT.—The Gem theater, recently taken over by Arthur Mann, has been overhauled, the interior redecorated, and renamed the American.”

Here is the history of the building.