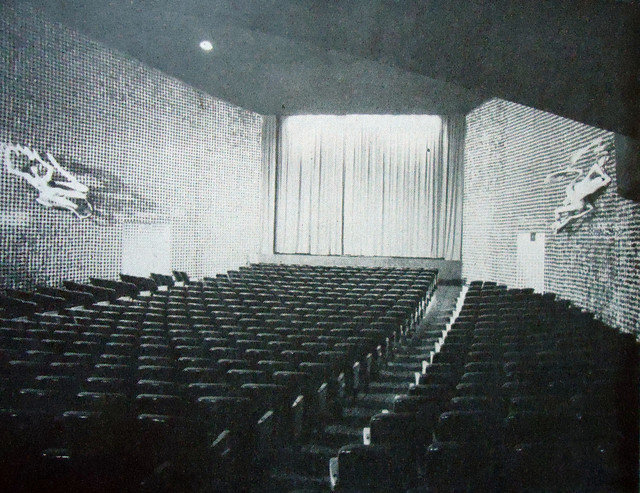 The Gaiety Theatre was opened by Klaw and Erlanger for George M. Cohan on September 4, 1909 with “The Fortune Hunter”. It was located at Broadway and W. 46th Street, designed in Louis XV style, containing two balconies, boxes, and a large proscenium arch. Seating a little over 800, the Gaiety Theatre was designed by the architectural firm of Herts & Tallant, the duo also behind the New Amsterdam Theatre, Liberty Theatre and Follies-Bergere Theatre (better known as the first Helen Hayes Theatre, and before that, the Fulton Theatre).

Home to numerous successful legitimate shows in its first nearly two decades of operation. Its first big hit was “Lightnin'” which opened on August 26, 1918 and ran for 1,291 performances. Stars such as Helen Hayes, John Barrymore, Douglas Fairbanks, Sr. and Leslie Howard all appeared on-stage during this time. The Gaiety Theatre presented its last play “Love in a Mist” on April 12, 1926 which ran for 120 performances. It was closed and soon reopened as a movie theatre like so many other Broadway theatres. It had a short-lived foray into musical stage shows in 1931-2). In the mid-1930’s, in addition to movies, the Gaiety Theatre began to present burlesque acts, and soon the Gaiety Theatre was the city’s premier burlesque house, even hosting the occasional big-name Hollywood act onstage, like Abbott and Costello.

In 1942, an attempt at reviving vaudeville at the Gaiety Theatre failed, and in summer of 1942 it briefly joined the Eltinge/Empire Theatre on 42nd Street to be renamed Laffmovie Theatre screening comedy shorts & cartoons. In 1943 the theatre was renamed the Victoria Theatre, and returned to feature length movies with the Russian documentary “The City That Stopped Hitler-Heroic Stalingrad”(aka Stalingrad), narrated by Brian Donlevy. The Victoria Theatre and its adjacent neighbor, the Astor Theatre, had the world’s longest advertising sign which covered their facades for an entire block long. The auditorium was remodeled in 1950.

In the 1970’s, the Guild Theatres chain acquired the Victoria Theatre and renamed it the Embassy 5, being their fifth house in the Times Square area.

By the late-1970’s, however, it had closed. Despite the efforts of preservationists, the theatre met the wrecking ball on March 22, 1982, together with the adjacent Astor Theatre, Morosco Theatre, Bijou Theatre and Helen Hayes Theatre. During the demolition, however, a section of the W. 46th Street facade collapsed into the street, forcing its closure for more than two days.

I started going to the Victoria in the late ‘60s, and I recall that it had an unusual auditorium. The rear of the orchestra started high and then sloped downward (similar, in a way, to today’s “stadium seating”), but then raked upward again as it got the front rows, which was bizarre. Does anyone else remember the Victoria this way?

Due to its central location in Times Square, there are hundreds (thousands?) of photos of the exterior, but it seems there are scant representations of the interior…

There is an interior photo on page six.

That photo does seem to show the orchestra sloping upwards at the front.

Reminds me of the seating at the Thalia…

Funny but the proscenium in this theater was larger than what it appears in that photo. I saw Lady and the Tramp here. The other film was some Disney glacial or artic adventure of which I can’t remember the title nor did I want to see it

Anyway it was in 1.85 aspect ratio and when Lady started the borders of course had not been changed and the image was playing on the borders on the sides. Surprise.

There wasn’t a peep out of the audience and of course I went to an usher to complain. He looked at me in astonishment and said nobody had said anything before. They changed it and it was a nice sized Cinemascope screen.

Shorpy link with a 1949 photo. Be sure to click on View Full Size.