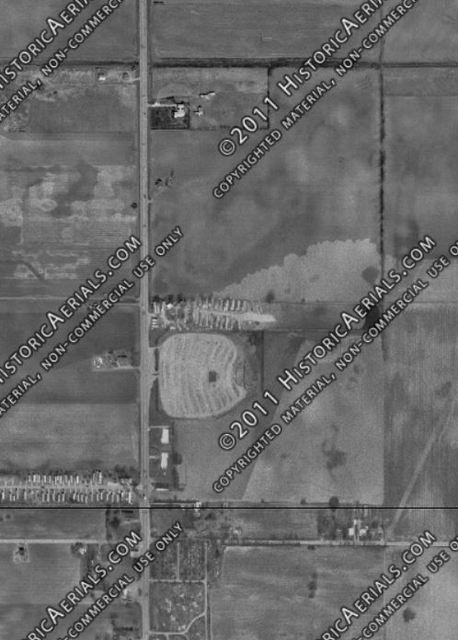 The Starvue Drive-In opened October 4, 1949 and had a capacity of 400 cars, single screen. It operated until the late-1970’s and was demolished. On the site was a car dealership which closed by 2013.

The address you’re giving is totally off. It was on further down the road past the big car dealerships. I went there as a kid and remember it quite well.

Guess what Ron? I FOUND IT!

Approx. address for this drive-in was 2740 South Division Street. This was across from the trailer park @ Dogwood.

Moxley & Moxley Theaters started the Starvue Drive-In launching with “Fury at Furnace Creek” on October 4, 1949. The Moxleys would sell out to the McCuthchens who had owned the Gem and still had the Roxy and Ritz Theaters in Blytheville. On May 29, 1969, the Malco Theater Circuit purchased the Roxy and Starvue from May McCutchen (the Ritz had closed at the end of 1966). Malco quickly drew ire for two X-rated features at the Starvue and pretty much stuck to the hits though running exploitation fare in 1977 if not beyond before closing, being demolished and becoming a car dealership.

1961 print ad added courtesy Blytheville’s Past in Pictures. Logo appears to have been changed to Star Vue by then.

The Original Screen Of The Star-Vue Drive-In Lasted From Its Opening On October 4, 1949 Until November 6, 1954 (With The Last Films Shown On The Original Screen Being “War Of The Worlds” And “Thunder In The Last” Along With A Herman And Katnip Cartoon In “Northwest Mousie”).

On March 26, 1955, Reports Say That The Original Screen Was Blown Off And Damaged Caused By Heavy Wind. It Ended Up Replacing It With A 80ft CinemaScope Screen.

The CinemaScope Screen Lasted For 18 Years, 2 Months, And A Day. On May 27, 1973, The Screen Was Blown During Damaging Wind Gusts During A Severe Thunderstorm Warning.