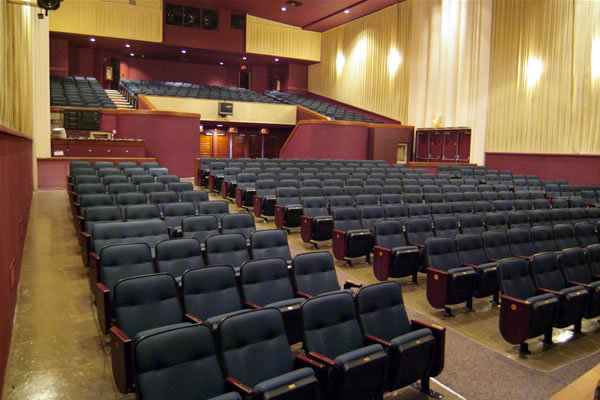 The 977 seat Strand Theatre was one of the big 3 movie theatres in Erie–the other two being the Warner Theatre and Shea’s Theatre. This Strand Theatre opened on November 14, 1948, and replaced an earlier (larger) Strand Theatre which operated on State Street. Originally built by Stanley-Warner, it had seating on a stadium plan, with a raised stepped section at the rear. I believe this new Strand Theatre later stood empty for a number of years until it was rescued by the Erie Playhouse company in 1983.

Currently seating 433, the theatre has been renovated in 1993 and 2007 and was recognised by the American Theatre Association in 1985 as one of the Ten Best Community Theatres in the United States.

Still wish it looked like the THSA mystery theater #12 photo in the Jan 14, 2008 post! IF those doors are still in existence which I seriously doubt, they should be re-installed.

A 1996 view of the former Strand Theater building in Erie.

This is how the Erie Playhouse should still look, imo!

There was a balcony in the Strand. My father was a part-time projectionist there during the Seventies. I would sit with him in the booth or in the balcony (which was closed to the public by that time for some reason. I saw many movies there, including The Godfather,Jaws (18 times) and a re-release of 2001. The balcony was only opened one time that I remember, for Star Trek 2 in 1981 or ‘82.

This Strand Theater replaced the original Strand, which was around the corner on State Street. The “new” Strand had a stadium style balcony. The design was art moderne. As you entered the lobby, the concession stand was to your left, which also had the stairs leading to the rest rooms on the lower level. The three strip Cinerama was set up in one booth in the balcony. in 1960, “Ben Hur” opened in 70mm and, if memory serves, played for almost a year. for 70mm they returned to the original booth. Across the street was the Majestic, an old vaudeville house which became Shea’s. There were also the Colonial, Columbia and the State in downtown Erie

I agree it looks “TACKY” but thats just my opinion,the owners most likely love it though.

The new facade is an improvement. Color and an art deco style lower treatment. Doors are similar to old ones but fresher. Good job and not tacky.